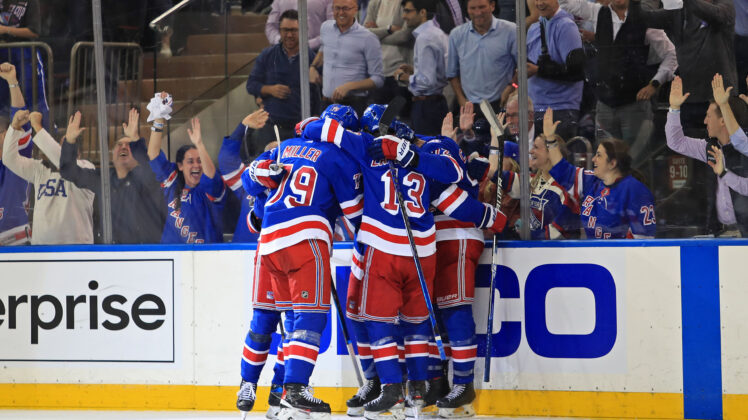 Madison Square Garden played host to Game 1 of the Eastern Conference Final and watched the most dominant performance from the New York Rangers in the playoffs to date.

The party got started just a little over a minute in and did not stop until the home crowd serenaded Tampa’s goalie Andrei Vasilevskiy with “Igor’s Better” chants.

The New York Rangers opened up the game by scoring 1:11 into the first period. Vatrano made a strong neutral zone chip up ice where a racing Zibanejad got to the puck first. He quickly sent it over to a wide-open Kreider, who snapped it by Vasilevskiy on the team’s first shot.

Steven Stamkos would even the score at 1 with an absolute blast. Igor Shesterkin, who stopped 11 shots in the opening frame picked up the shot just a tad late.

The second period saw a much faster and aggressive Blueshirts squad which eventually paid off 7:50 in. Vatrano collected a loose puck in the slot and whipped it top shelf over Vasilevskiy’s blocker.

“I saw a lane open up– saw some traffic and I caught [Vasilevskiy] off guard,” Vatrano said on MSG. “A big goal for us and we kept going off that.”

Just 42 seconds later, the Lightning responded with a strong transition out of their own zone. Ondrej Palat would cash in a rebound off a Stamkos shot to even it at 2.

Then the Kid Line took over.

Chytil would score his first of two in the second period on a strong shift in the Tampa zone. Alexis Lafrenière sent the puck down low to Kaapo Kakko, who has been dominant when cycling. The big Finn drew Lightning defenders to him as he hit his center in the slot for the 3-2 lead at the 10:09 mark.

“I just keep working,” Chytil said on ESPN. “Everything I can do and I’m happy it’s going in at an important moment.”

The Kid Line would strike again five minutes later in one of the Rangers most dominant couple of shifts of the entire season. It started with Barclay Goodrow’s line cycling in the offensive zone for about a minute before Chytil converted a cross-ice feed by K’Andre Miller to make it 4-2.

“I thought we played as good a period as we have all playoffs long,”Gerard Gallant said about the middle frame.

The Blueshirts went right back to work in the third period with Artemi Panarin snapping an Andrew Copp feed by Vasilevskiy just 30 seconds in to make it 5-2.

A few minutes later Alex Killorn was called for holding Panarin and that set up a Zibanejad trademark power play blast to increase the lead again. Panarin and Fox picked up the helpers.

Rust or not after not paying in 9 days, Vasilevskiy finished the game giving up 6 goals on 34 shots for an .824 SV%. That was lower than the .875 SV% he posted in two losses in the regular-season to the Rangers.

The game ended with a frustrated Tampa team getting involved in sidebar scrums that could rear its ugly head again in Game 2 which is set for Friday night.

“We had great goaltending again and we buried our chances tonight,” Gallant said.