NY Rangers hope it’s all ‘Goody’ against the Lightning 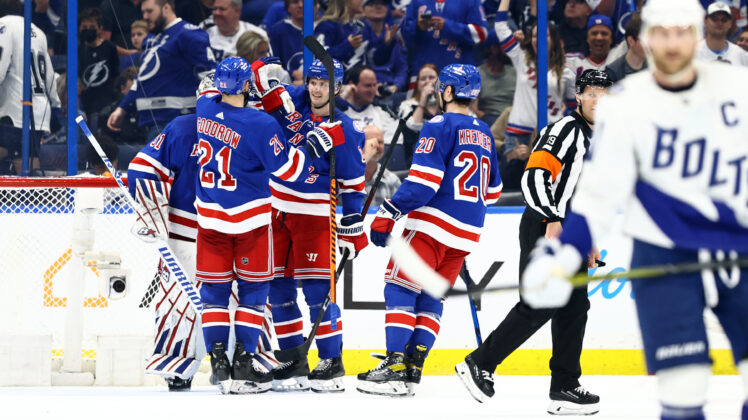 The New York Rangers and the Tampa Bay Lightning are both trying to become a team of destiny as the Eastern Conference Final is set to get underway at Madison Square Garden tonight.

Tampa comes into this series as the two-time defending Stanley Cup champions, while the Rangers are coming off an accelerated rebuild launched in 2018. One has the experience of being here and doing that, while the other’s inexperience has played to their advantage in getting to this point.

Lightning head coach Jon Cooper and some of their players have talked about winning a third straight Cup as if it were their divine providence to do so. Meanwhile, the Rangers are all ‘No Quit New York’ and playing their game regardless of the opponent.

“There certainly has been no quit in this group,” President and GM Chris Drury said on Tuesday. “In both series to comeback and win– a resilient bunch. And the second thing is how close they are. It started before training camp– it’s a close-knit group.”

Rangers want to be the team of destiny

As the Garden readies to host Game 1 of the ECF, the Lightning are looking to be the first team to win three-straight championships in the NHL since the New York Islanders rattled off four Cups from 1980-83.

They will have to do so without Brayden Point, who was injured in their opening series against the Toronto Maple Leafs. He skated today after practice and fell during drills coming up in a bit of pain. He’s not expected for Game 1, but that doesn’t have Tampa worried.

“That’s the beauty about our team,” captain Steven Stamkos said. “Everyone contributes and that’s what you need this time of the year. We talk about it all the time, that you just never know when it’s going to be your moment.”

Tampa still has Nikita Kucherov and Victor Hedman, plus they’re getting contributions from players like Ross Colton, who is their third leading scorer with 8 points in the playoffs.

“I just don’t think you advance unless everybody contributes,” Cooper said. “You can’t have the same guys keep doing it.”

That doesn’t seem to be phasing the Rangers though.

“They’re a great team and they’ve got great players that have won Stanley Cups,” Gerard Gallant said on Tuesday. “We’re going to worry about playing our game. We’ve had good success against them in the regular-season which means nothing. We’re going to attack and play our game.”

Mika Zibanejad has 19 points in postseason action and Adam Fox has 18. You also get the sense that Artemi Panarin is ready to breakout after having the Carolina Hurricanes double team him for 7 games. 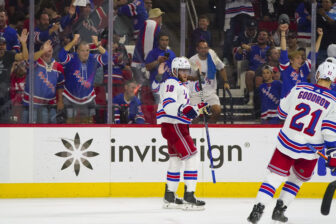 The Blueshirts got a shot in the arm in their series against the Pittsburgh Penguins with the return of Tyler Motte. They got the same jolt from Barclay Goodrow in Game 6 as they were facing elimination.

Goody, as he’s affectionately known, was injured blocking shot in Game 1 against the Penguins but was able to help the Rangers comeback against the Canes from 3-2 down in the series.

“[Copp] and I were driving to the rink together and Goody was there before us,” Frank Vatrano said after Game 6. “I was like, ‘Goody’s here, I think he might be playing,’ and Copp’s like, ‘What are you doing here?’ and he’s playing. It doesn’t surprise me at all. A guy who’s won Cups and knows what it takes to win. To see him come back from an injury like that so quick. What he brings to our team is not something you can replace and to have him in our lineup gave us that extra jump for sure.”

The 29 year-old has been a great fit for the New York Rangers this season after a trade and sign in the summer. In 79 games, he’s recorded 13 goals, 20 assists, for 33 points. All being career highs for the rugged forward.

“What he went through in San Jose. Winning back-to-back Cups with Tampa,” Drury said of Goodrow. “All our homework about him on and off the ice. What a character player he was and the things he could do not only in the playoffs but in the regular season to create and build a winning culture.”

Having Goodrow in this series may be one of the keys to winning it. I mean, who else would know better what the strengths and weaknesses of the Lightning are?

“From our standpoint we have to bring it to another level,” he said. “They’ve been there and they know what it takes. They want to get back to the Finals but so do we. We’re halfway to get to what we want to accomplish.”

Goodrow had success during the season against his old mates. In three games, he posted two goals and one assist. The Rangers swept the season-series and they hope Goody has that same impact in these playoffs. 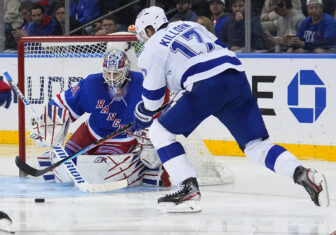