Chris Drury impressed with trade deadline additions, can the Rangers keep them all? 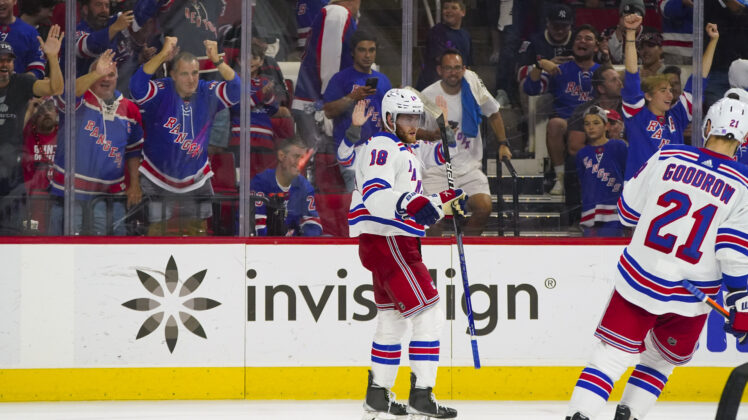 The New York Rangers are back in the Eastern Conference Final for the first time since 2015. It’s been an impressive turnaround since “The Letter” was sent out in 2018 indicating the team was going to rebuild.

There’s so many moves to discuss that have brought the Rangers to this point as they get set to host the Tampa Bay Lightning in Game 1 on Wednesday night. However, let’s just stay in the now as President and GM Chris Drury addressed the media today.

“When the season started we wanted to do everything we could to get into the playoffs,” he said on Tuesday. “Our mantra was when you get in anything can happen. We’re excited to be one of four teams left and we’ll keep grinding to do the best we can.”

The New York Rangers began to fill in holes and add depth to their team just prior to the March 21 NHL Trade Deadline. It began a few days prior with the acquisition of Frank Vatrano and then on actual trade deadline day, Chris Drury added three more players.

“They’ve all contributed. I think our scouts and staff did a great job identifying those guys as targets and we were fortunate enough to pull off the deals to get them,” Drury said. “They’ll be plenty of time for those kind of questions after it’s all over. They’ve certainly fit and been used extremely well by [Gerard Gallant]. We’re thrilled to have them.”

The GM all shared a funny story regarding the condition in the Copp trade that turned a conditional second into a first once the Rangers eliminated the Hurricanes in Game 7.

“I did come down after the game last night to go around and see the players,” Drury smiled. “Copper looked up at me and said, ‘Sorry about your first,’ which was no problem at all.”

Can the New York Rangers keep them all?

The fact that Drury did not answer questions regarding the fate of his trade deadline acquisitions isn’t a surprise.

What has been reported is that the Rangers are talking with Andrew Copp about an extension. It’s also believed that his next deal could be in the $5.5M AAV range.

If the Rangers opt to give him that much it likely means that Ryan Strome will head to unrestricted free agency. Per CapFriendly, the Rangers have around $14M in space with 14 players under contract.

First and foremost, the Rangers need to sign RFA Kaapo Kakko. If they can do it on a low cost 1-2 year deal, they could possibly find a way to keep Tyler Motte and Frank Vatrano.

Justin Braun, who is 35 is most likely heading to free agency. The Rangers will also need to sign a backup goalie as Alexandar Georgiev is heading for a trade or not receiving a qualifying offer.

One player the Rangers will most certainly try and trade this offseason is Patrik Nemeth, who has two-years remaining at $2.5M AAV.

As the picture becomes clearer, we will have more during the offseason. 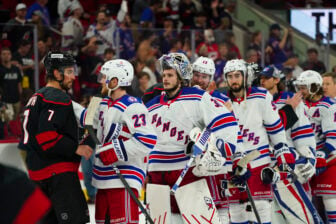 NHL Playoffs Previews and Predictions for Round 3

The Avalanche and Oilers along with the Rangers and Lightning are ready to battle in the Conference Finals. Get the latest previews and predictions here. Read More.