New York Rangers should extend Frank Vatrano for next season 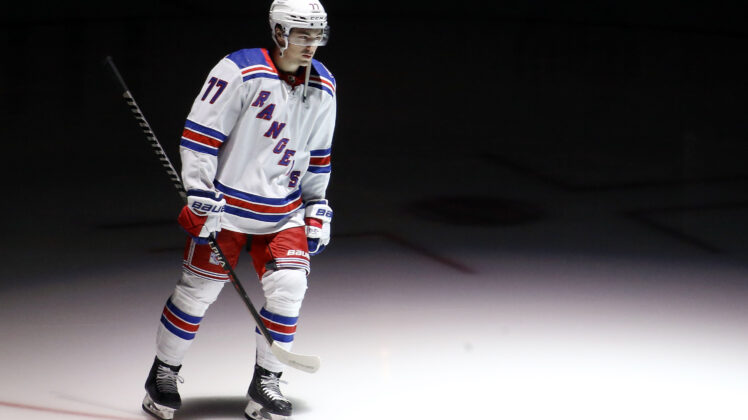 The New York Rangers will be in between the NHL Salary Cap and a Hard Place next season. Despite the ceiling being raised by $1 million to $82.5 million, Chris Drury is estimated to only have around $12.5 million is space to work with.

Per Cap Friendly, the team has 15 regulars signed to contracts. They include as follows:

That means they have just $12.5 million to extend RFA, Kaapo Kakko and to make a decision on UFAs Ryan Strome or Andrew Copp. It doesn’t seem likely the Rangers can have all three of those players in the lineup.

Tyler Motte or Kevin Rooney seems like another pending UFA decision in the making.

That’s why the Rangers will be seeking a cheap new backup goalie and probably will be unloading Patrik Nemeth in the summer.

There is one pending UFA that the Rangers should be strongly considering keeping around and that’s Frank Vatrano.

“I’m absolutely thrilled to be here. It’s a dream come true to play at Madison Square Garden and for the Rangers,” Vatrano beamed after the trade. “Ownership, staff, and teammates have been very welcoming.”

New York acquired Vatrano from the Florida Panthers for a 2022 fourth-round draft pick prior to the deadline. Since he’s joined the team, the speedy and gritty winger has simply been a great fit.

“My whole career I’ve been up and down the lineup,” Vatrano said. “Even playing in the top six you can’t change your game.”

Vatrano is defensively responsible, aggressive on the forecheck, and not shy to shoot. The Massachusetts native is now on the first line and working well with Chris Kreider and Mika Zibanejad.

“You see how he can shoot a puck and he can change a game with his speed,” Adam Fox said of Vatrano. “He’s obviously a really good player and he’s helped us out so far.”

This season, he has 25 points (15 goals, 10 assists) through 58 games, the fifth time he has scored double-digit goals in a season. In 9 games with the Rangers, he’s amassed 5 goals and 6 points.

Vatrano, 28, has 172 points in 388 career games with the Boston Bruins, Panthers, and Blueshirts.

He’s wrapping up the final year of a three-year contract that comes with a cap hit of $2.533 Million and his next deal shouldn’t be that much more. It’s even possible it could be around the same it is this season.

If Chris Drury can maybe offer him some extra term, possible a five-year deal, we could see Vatrano stick around for $2.5M.

That would give the Rangers a legitimate top nine forward who can play right wing and $10 million left to take care of their lineup.