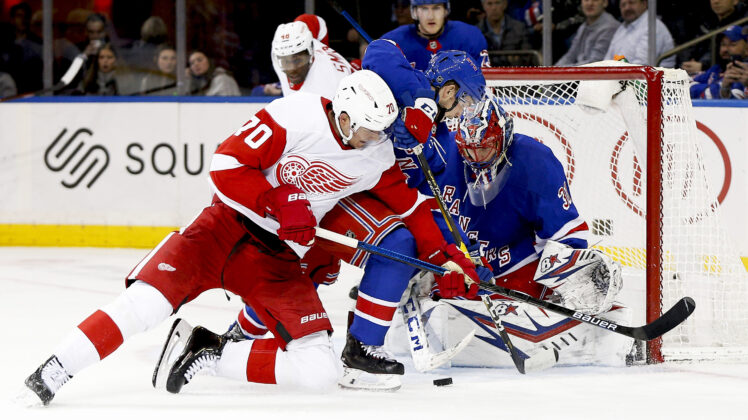 An afternoon affair is on tap for the New York Rangers at Madison Square Garden as they eye first-place in the Metro Division.

Standing in their way are the Detroit Red Wings, who are coming off a 3-0 win over the Carolina Hurricanes to keep the Rangers within two points of the division lead. The Canes will be facing league-leading Colorado as the Avalanche fight to win the Presidents Trophy as the NHL’s best team in the regular season.

Head coach Gerard Gallant has the luxury of giving some of his players a day off.

That goes with having a playoff spot locked up and a 7-2-1 record in your last 10 games.

Gallant felt that slumping 20-year-old Alexis Lafrenière needed a break and rested him Wednesday against Philadelphia. The Rangers recorded a 4-0 shutout without the top pick in the 2020 draft.

“He’s a young guy and he looks a little bit tired,” Gallant said. “He hasn’t played in an 82-game NHL schedule before. He’ll be back in the next game.”

Alexis Lafreniere on the fourth line?

Per multiple reports, Lafrenière practiced on the fourth line that featured a rotation with three other players. Dryden Hunt, Kevin Rooney, and Ryan Reaves all took turns.

Lafrenière hasn’t scored a point in eight consecutive games prior to being a healthy scratch. The 20 year-old sophomore has recorded 15 goals and 25 points in 72 games this year to date.

It’s really not surprising that Lafrenière would return to the lineup on the fourth line after the last game. Filip Chytil, Kaapo Kakko, and Barclay Goodrow were buzzing and drove the offense in the win over the Flyers.

“That line was excellent the other night,” Gallant explained. “They were real consistent.”

Kakko, who missed a large chunk of the season with an upper body injury, scored his first two goals since Dec. 15.

“Real strong game,” Gallant said. “He looked really solid in there, made some real big saves for us. He was the difference in the game, for sure.”

Both Rangers-Red Wings games this season have required overtime. Detroit won a shootout 3-2 in New York on Feb. 17. Andrew Copp gave New York a 5-4 victory in Detroit on March 30 with an overtime goal.

Detroit is coming off a shutout win, doing the Rangers a favor in the process by blanking Carolina 3-0 on Thursday when Alex Nedeljkovic made 46 saves against his former team.

“They’re one of the best teams in the league, but our guys battled. … Ned was outstanding, was absolutely great, and good for him, I know how much this meant to him, so good for him,” coach Jeff Blashill said. “We battled and stayed with it. The (desire) on the bench was great, the energy was good, and we got great goaltending, and it allowed us to find a way to win.”

“We were sacrificing our bodies, sacrificing for each other, we were doing that (at the) beginning of the year,” Nedeljkovic said. “We did a good job, for the most part, of shutting them down.”

Detroit is 3-1-1 in its last five following a six-game winless streak. The game against Carolina began a rugged stretch for the Wings, who face Atlantic Division leader Florida on Sunday and Thursday sandwiched around a game at two-time defending champion Tampa Bay on Tuesday.

The Islanders spoiled Carey Price’s return to the Canadiens crease, and the Panthers dismantled the Jets. Check out The Daily Goal Horn every morning for recaps of all the action from the day before. Read more.