The New York Rangers play their first of a four-game western roadtrip on Thursday night against an improved Seattle Kraken squad.

“We get some time to spend with each other,” captain Jacob Trouba said. “In New York we kind of live far from each other. We see each other at the rink but it’s nice to get to dinners and go out to spend time, so everyone enjoys that. We’re excited to get the trip started.”

This season, the Blueshirts have fared well away from Madison Square Garden with a 4-3-0 record. More importantly, they’ve won three out of their last four road games and outscored their opponents by an 18-9 margin.

“I would sooner go on a four-game road trip than one game here and back,” Gerard Gallant admitted via the team’s YouTube channel. “If we can maintain the way we’ve played we’ll win more than we’ll lose.”

The Rangers are coming off a big character win Sunday night at MSG versus the Arizona Coyotes. After returning home at 3 AM from a 2-1 loss in Nashville to the Predators, they could not keep up with the Yotes being outshot 17-4 in the first period.

“It was a long road trip and we started slow,” Fox said on the MSG postgame show. “[Shesterkin] keeps us in most games. What he does for us speaks for itself. He’s the backbone of the team and we’re lucky to have him.”

Igor Shesterkin was heroic to start that contest and finished with 31 saves as the Rangers eventually woke up and earned a 4-1 win.

Gallant has not named a starter for tonight’s contest but Shesterkin is expected to go.

One of the Rangers hottest players is defenseman Adam Fox, who earned NHL Third star of the Week honors on Monday. He had a goal and an assist against Arizona to extend his point streak to six games.

There’s been some concern that players like Fox and Mika Zibanejad may be playing too much.

“As soon as I sit them down a little bit they’re looking at me to get back on the ice,” Gallant said. “It’s about winning now but we do look at [the minutes] all the time. Our staff says their fine.”

One player that may get back into the lineup at some point in this trip is Vitali Kravtsov after being forced out with a tooth infection.

“He had that oral surgery, so we wanted to give him another day,” Gallant said of his availability. “We’ll decide tomorrow. He looked good out there.”

Kravtsov, 22, has missed the team’s last two games due. He has 1 assist in six games this season, which came in the team’s 8-2 blowout over the Detroit Red Wings last week.

Kraken on the rise

The Seattle Kraken last played on Sunday and lost in overtime to the Winnipeg Jets by a 3-2 score. It was tough one because the game was tied with just 5 seconds left on the clock. For Seattle it was their second consecutive loss after a franchise best winning streak of five games.

This won’t be an easy game for the Blueshirts as the Kraken have improved in all areas from their inaugural season. With 19 points, they’re third in the Pacific Division and have a +7 goal differential.

The addition of Andre Burakovsky this offseason from the Colorado Avalanche has proven to be a good move as he leads the team with 14 points in 16 games. Rookie Matty Beniers is also one to watch with 5 goals and 9 points in 16 contests.

The New York Rangers won both games against the Kraken last season. 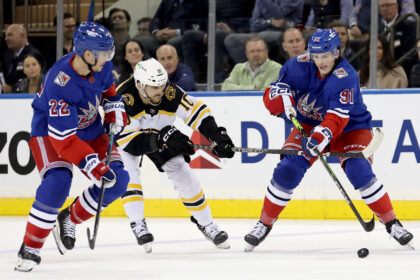