The New York Rangers were absolutely atrocious in the faceoff circles on Thursday.

The Leafs are tied for the NHL lead with the Hurricanes on draws at 55.2% and it showed against the Blueshirts who are 31 out 32 teams at 45.6%.

Draw after draw, the Toronto Maple Leafs won them fairly clean 84% of the time. When you win 36 of 43 faceoffs, you would assume it would be an easy win. However, the Blueshirts were in it until the end and almost tied it several times in the third period before the clock ran out.

“We were bad at [faceoffs], but I don’t think it killed us by no means,” an upbeat Gerard Gallant said after the game. “Toronto is one of the best faceoff teams in the league, but it didn’t [impact the] outcome of the game for me.”

“I thought faceoffs killed us, myself included. [We were] terrible,” he said. “It’s frustrating. I know we work so hard on it. When you give a good team the puck to start, it’s really hard.”

Despite the severe disparity in the dots, Gallant was right, it was not why they lost. Matter of fact, it was a game they probably should have receive a point in.

Late in the third period, down by one, Adam Fox was grabbed by a Leafs defender as he was cutting in to accept a pass from Artemi Panarin alone in front of goalie Jack Campbell. The referee opted to swallow his whistle in a close game instead of making the right call.

In the end, the shot differential was just two. Toronto finished with 30 shots to the Blueshirts 28 even though they owned the draws.

Rangers done in by a mediocre second period

Morgan Rielly scored on a screened shot from the left point on a pass from Wayne Simmonds at 3:41 of the first period.

“That was kind of the pre-scout, to get in front of his eyes because he’s a great goalie, so that’s all I tried to do there,” Leafs forward Michael Bunting said. “I was able to get in his way and Morgan was able to shoot it in the net, so it was a good first goal for us.”

The Blueshirts outshot the Leafs in every period except the second, which is likely the biggest reason why they lost this one.

Rielly scored his third goal of the season on a power play at 10:59 of the second period. Auston Matthews set up Rielly for a shot from the left circle with the initial work done by John Tavares. Hunt was serving a tripping penalty.

“The second period, I think we just played right into their hands,” Mika Zibanejad explained. “We gave them too much time and not the greatest decisions with the puck. If you give them time, they’re going to take advantage. That’s a good team. At the end of the day we gave ourselves a chance to at least get a point but that’s how it goes sometimes.”

On a positive note, Dryden Hunt scored his first goal of the season, and his first in 31 games, at 3:30 of the third period. The goal came from the slot came off a rebound from Kaapo Kakko’s shot. Ryan Strome also had an assist. Both players extended their point steaks (3 and 5 respectively) in the process. 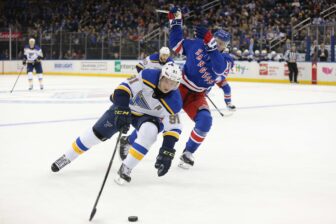