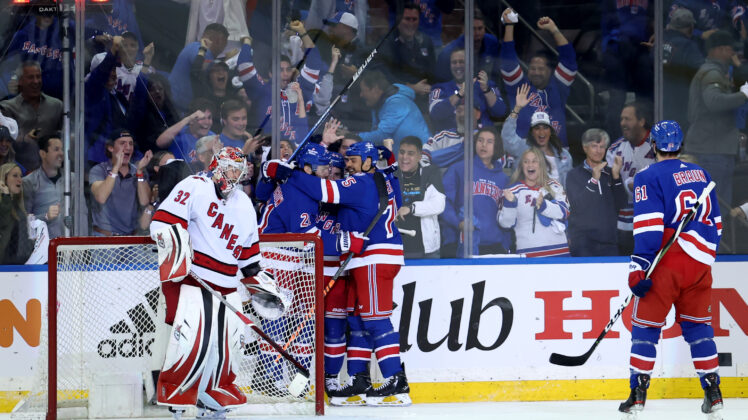 The New York Rangers remain resilient and put forth one of their best games in these Stanley Cup Playoffs.

By posting a 5-2 win at Madison Square Garden in Game 6, the Rangers have forced a winner-takes-all Game 7 in Raleigh on Monday night.

Buoyed with the return of alternate captain Barclay Goodrow, the Rangers fourth line had a pep in their step and got on the board early thanks to Tyler Motte. From there, the Rangers kept the pressure up gave the home fans a stick salute at center ice.

“What he’s done for the last couple of years with the Stanley Cups,” Gerard Gallant said. “He’s a leader–he’s huge for our club.”

Motte opened the scoring 7:22 into the game. Coming in over the blue line, he used the Hurricanes defenseman as a screen and snapped a shot through the arm of Antti Raanta. The goal was unassisted.

Mika Zibanejad would extend the lead with a power play goal a little over two minutes later. Brendan Smith was in the box for high-sticking Alexis Lafrenière and watched Zibanejad dance into the zone opening up Raanta’s legs to put the Rangers up 2-0.

Igor Shesterkin picked up an assist on the goal and also stopped all 15 shots he faced in the first period. He finished with two assists and 37 saves.

“The last game left a salty taste in our mouth,” Ryan Strome said. “We just want another chance in Raleigh and it should be a great game.”

The second period was a lot more wide open as the teams exchanged two goals each.

First it was Filip Chytil, who missed a 2-on-1 set up by Lafrenière just seconds before. The second time around he took a feed from Adam Fox and used Kaapo Kakko as a decoy snapping it over Raanta’s glove and chasing him from the net.

Chytil’s next goal was sandwiched in between two tallies by the Hurricanes’ Brady Skjei and Vincent Trocheck. On this one, he came out of the corner with the puck and whipped a backhand over Pyotr Kochetkov’s shoulder.

Artemi Panarin would close out the scoring with a 5 on 3 power play goal in the third period. Chris Kreider put the puck into the slot where the Breadman corralled it and snapped it by Kochetkov.

“Just belief in our group. We’ve got a lot of great guys in that room,”Motte told ESPN. “We have each other’s back and go to work for each other. It’s Game 7 (next) let’s see what we’re made of.”

Game 7 is set for Monday night in Raleigh where the Hurricanes have yet to lose in the postseason going 7-0.