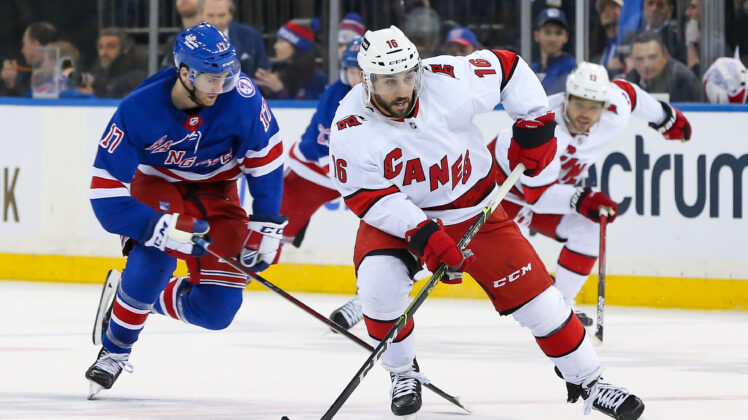 The pieces are quickly falling off the board for Chris Drury and the New York Rangers.

Ryan Strome and Andrew Copp are hitting the market and unlikely to re-sign with the Blueshirts. There’s been no word on either Frank Vatrano or Tyler Motte and these are just the team’s own pending UFA’s.

Evgeni Malkin, who was considered a free agent target to fill the hole at 2C re-signed with the Penguins late on Tuesday. On the trade front, J.T. Miller appears to be staying put in Vancouver for now. The Jets want to hold on to both Pierre-Luc Dubois and Mark Scheifele making the Rangers options really limited.

As for the Patrick Kane fantasy playing the opposite wing with Artemi Panarin, that’s exactly where it will stay– in fantasyland. Reports have surfaced that he wants to see how the year goes before waiving his no-move clause.

When the bell for free agency rings at 12 PM ET, the Rangers will make an attempt to sign center Vincent Trocheck.

There’s been interest in Trocheck dating back to his time with the Panthers. However, as a UFA he will command a nice increase that could see him break the $6M AAV mark.

With Malkin back to Pittsburgh, look for Vincent Trocheck in Manhattan. That appears to be his best fit.

Trocheck, 29, registered 21 goals and 51 points with the Carolina Hurricanes last season. He is a two-way player regarded as Brad Marchand lite. Chris Drury absolutely loves players that are hard to play against making Trocheck an obvious target.

However, is he offensively gifted enough to play with Artemi Panarin? That’s really the big question. Plus, if you didn’t want to give Strome or Copp a five-year deal around $6 million per season, why would you give it to Trocheck?

From what I could gather, unless Drury can sign or trade for a second line center on his terms, the Rangers will ride with Filip Chytil as the second-line center to start the season.

The Rangers have approximately $10 million in cap space to work today but at least $3.5 million needs to be allocated to a Kaapo Kakko bridge deal (2x$2M) and a backup goalie (~$1.5M).

That doesn’t leave Chris Drury with too much to work with after opting not to buyout Patrik Nemeth. Although there’s a lot of talk that a trade could see his entire $2.5M for the next two years come off the books, it will likely come at the price of adding a second round pick to incentivize the team to make the deal.

Regardless, the Rangers just can’t spend the remaining amount of their cap space for next season on one player. Despite not being able to come to terms with Tyler Motte, they will make another push to re-sign him.

On the free agent goalie front, a lot signs have them looking at Martin Jones and Thomas Greiss. Both would be great backups for Igor Shesterkin but it may take more than $1.5 million to get them to sign with the Rangers 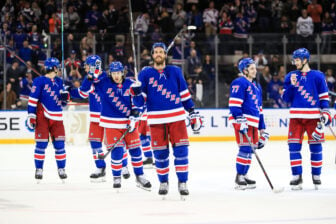