“I’m excited to formally introduce and welcome Gerard Gallant to the New York Rangers,” Drury began. “At the start of this process, I was looking for a coach with a proven track record and success at several levels. Turk (Gallant) checked all of those boxes.”

Gerard Gallant on the Rangers and his style of play

The 57 year-old Gallant was all smiles while speaking with the press. He spoke of trying to learn why things didn’t work out at his last three stops but then not living in the past. When he looks at the Rangers he sees a team on the rise.

“You look at the lineup and you see a team ready to take the next big step,” he said. “I want to be the hardest-working team in the league – to work hard, to battle hard, to make other teams say, ‘That team works hard every night.’”

As for the style of play Rangers fans expect, Gallant pointed to his last stop with the Vegas Golden Knights. He emphasized playing a “200 foot game” and for players having specific roles on the team. This was exactly what Chris Drury said soon after taking the job near the end of the season. “We need to take a deep look at what everyone’s roles are,” Drury explained. “We’ve got to get to a place where when you jump over the boards you know what your role is.”

That philosophical alignment is exactly why Drury hired Gallant in the first place. So what does that mean for the kids currently on the roster? “You give [the kids] the opportunity and hope that they take advantage of the opportunity they get,” Gallant noted. “We know we’ve got some very young, talented hockey players on our team. They’re going to get every opportunity.”

However, that opportunity will not be the same as it was for David Quinn who was mandated to develop those kids. “It’s not going to take 15 guys to win, it’s going to take all 23 guys on the roster,” the new coach said. Who those 23 players will be is yet to be determined. 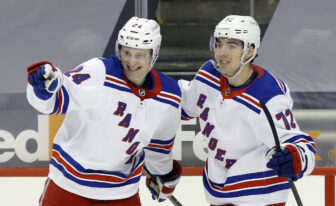 Chris Drury on his offseason priorities includes naming a captain

One very big takeaway from the press conference was Chris Drury saying he wanted to name a captain this season. “[Naming a captain] is a priority,” he revealed. “At the end of the day, it has to be the right person. I think we have a lot of leaders in our room.”

As to whom the “person” could be, three names immediately stand out. Mika Zibanejad, Chris Kreider, and Jacob Trouba. Late in the season, David Quinn noted that it was Trouba who became a vocal locker room leader as he grew more comfortable with the team.

When asked about why he decided to let David Quinn go, Drury was candid in saying he was looking for a new voice and new leadership. He felt that Gallant was exactly what the team needed for the next phase.

Drury also made mention of needing harder players to play against based off of what he’s seeing in the postseason. “We’re certainly going to need to play that way to have success,” he said.” We’re always looking at ways to improve the lineup.”

That will certainly need to come by way of trades and free agency this summer. The Rangers are no longer considered as a top destination for Jack Eichel, and it is uncertain if there’s another center beside Evgeny Kuznetsov available on the market. There are definitely “harder to play against” players in free agency like Jordan Martinook and Casey Cizikas. There are plenty more as well, but the market is expected to be hot with so many teams looking to improve.

What Drury opts to do this summer will obviously be guided by the principle that every player will have a role. It will be up to him to make sure Gallant has the right players for those roles.