The New York Rangers would not be at this stage of the NHL playoffs without their big stars.

Igor Shesterkin overcame a shaky few games against the Pittsburgh Penguins to become the team’s MVP again. Mika Zibanejad and Chris Kreider turned it on late in the first round to propel the Rangers to a 3-1 series comeback, with Artermi Panarin scoring the Game 7 winner in OT.

Adam Fox continues to be the team’s top point producer from the back-end and Jacob Trouba is playing his usual hard-physical style.

Still, the Rangers also wouldn’t be here if not for the play of these low-key top performers.

Justin Braun: The moment Gerard Gallant made the move to replace Patrik Nemeth with Braun as Braden Schneider’s partner during the first round changed the complexion of the third pair. The 35 year-old has been extremely steady despite playing his off side. In 9 playoff games, he has 1 assist with 13 blocks, 7 hits, while averaging 13:30 per night.

Tyler Motte: When Motte dressed for Game 6 against the Penguins it was a huge shot in the arm for the Rangers. He played a big role in completing the comeback after coming back from a serious shoulder injury on April 7. Motte registered 7 hits and a block to close out Pittsburgh. In game 3 against the Hurricanes, he scored a big empty-net goal to seal the win. It was his first goal/point as a Ranger.

Motte was recently voted as the #2 UFA the fans want to see re-signed.

Ryan Lindgren: The heart of a warrior. Lindgren was injured in Game 1 against the Penguins and missed the next three games. New York went down 3-1 while he was out. Playing hurt, Lindgren stepped into the lineup for Game 5 and even registered a long empty-net goal to secure the first of three straight wins to complete the comeback.

Lindgren has drawn comparisons to Dan Girardi by legendary goalie Henrik Lundqvist. It’s a really fitting one as no other Rangers defenseman did more to block shots, even when he was playing hurt than Girardi. 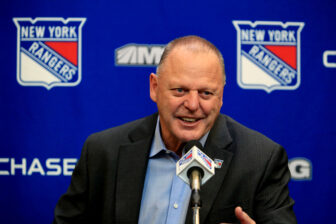 As these playoffs continue, other players will start to emerge but Filip Chytil is deserving of some accolades here as well. He may only have two goals and three points in the postseason, but is playing with a level of maturity we’ve yet to see from the 22 year-old.

Kaapo Kakko has also been very strong with the puck in the playoffs, controlling play along the boards to maintain possession and generate some cycle chances. Much like Chytil, he does not have the points to show for his efforts (1G – 1A), but he’s a factor on most nights.

The New York Rangers will look to even their series with the Hurricanes at Madison Square Garden on Tuesday night. Puck-drop is set for 7:00 PM ET with ESPN doing the network broadcast with ESPN 98.7 handling the radio duties. 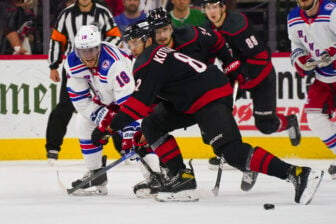 Recap all the action from Sunday as the New York Rangers claw back, the Oilers take a 2-1 series lead, and the Lightning are one game away from advancing. Read more.