The New York Rangers are getting ready to play their first home game of Round2 on Sunday against the Carolina Hurricanes.

No matter what happens in the playoffs, this is shaping up to be a very important offseason for the Blueshirts. Before free agency opens on July 13, the Rangers will have some big decisions to make regarding some key unrestricted free agents.

Next season, the Rangers will have only around $12.5 million to fill out their roster. That’s because Mika Zibanejad’s $8.5 million and Adam Fox’s $9.5 million contracts kick in eating a lot of the cap space they enjoyed this past season. They also need to sign RFA Kaapo Kakko, thus not leaving a whole lot of money left to sign their top UFA’s.

Let’s take a look at the key UFA’s in question.

Andrew Copp, 27, has been a great acquisition by Chris Drury. This past season, he has 53 points in 72 games with 18 of those coming with the Blueshirts. His last deal paid $3.64M against the cap.

“I try and excel in every way I can,” Copp said after playing a few games with the Rangers. “Versatility playing center, wing, face-offs, special teams both sides, and play strong defensively. Just try and do a little of everything and make the players better around me.”

Ryan Strome, 28, is wrapping a deal worth $4.5M AAV. Artemi Panarin’s favorite center would likely fetch well over $6M if he hits the open market. Of course, a deal of that size will hinder the Rangers cap maneuverability and make them prone to future offer sheets. He scored 54 points in 74 games this season.

Frank Vatrano, 28, was earning $2.53M against the cap this past season. The speedy and feisty winger has fit in nicely with Mika Zibanejad and Chris Kreider picking up 8 goals and 13 points in 22 regular-season contests. In the playoffs, he’s added two more goals and five points.

Tyler Motte, 27, was primarily brought in to add speed and relentless forechecking to the fourth line. His ability to kill penalties is becoming a big reason to bring him back. He was injured after only 9 games with the team, but since coming back to the playoffs has had a huge impact on the team’s PK and 4th line. Motte picked up 15 points in 58 games last season with a $1.225M cap hit.

On Saturday, I ran a Twitter poll asking Rangers fans to weigh in on which pending UFA they’d like to see back.

Andrew Copp was the overwhelming winner with 53.7% of the 3,143 votes to re-sign. The good news is that the Rangers agree, as they’ve been actively trying to get him inked.

“I’m told the New York Rangers are going to push hard – hard – to extend Andrew Copp, we can understand why,” Darren Dreger reported in April. “In Andrew Copp, talk about a chemistry experiment that has been highly successful. Perfect fit with Artemi Panarin.”

Surprisingly, it was Tyler Motte with 31.9% of votes to be re-signed that came in second. If the Rangers can get Copp in around $5M, they could surely add Motte as well.

Frank Vatrano came in third with 10.8% of the vote and Ryan Strome was last with just 3.6% of tallies. 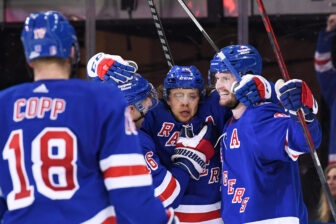