The New York Rangers shutout the Tampa Bay Lightning at Madison Square Garden 4-0 on Sunday. It was an impressive victory considering the defending champs had almost their full lineup and the Blueshirts were going without Artemi Panarin, Ryan Lindgren, and Kevin Rooney due to COVID protocols.

However, it was another move on defense that caught some attention today. Patrik Nemeth was scratched with what Gallant called a “personal issue” giving 21 year-old rookie Zac Jones a chance to play.

Jones, the team’s third round selection (68th overall) during the 2019 NHL Draft made his season debut. No stranger to the big show, he made his NHL debut late last season and picked up 4 assists in 10 games.

The heady defenseman has drawn some comparisons to Adam Fox’s style of play. Not a physically imposing rearguard, he makes up for it with his high hockeyIQ and excellent positioning. Jones is also an solid skater and makes a good outlet pass.

He was added to the taxi squad after leading all Wolf Pack defenders in scoring with 17 points in 21 games.

In today’s contest, Jones played extremely well. He finished the contest with 13:32 TOI and a +1 rating.

If some of you are surprised with his performance you shouldn’t be, he was one of the final players cut from training camp. When he was sent to Hartford, Jones was clear about where he felt his game was at.

“I think I deserve to play in the NHL,” Jones explained. “If I get sent down, I’m not going to complain about it… I’m going to go down there and work as hard as I can to get myself back up to the NHL.”

After today’s showing, it won’t be easy for Gallant to sit him tomorrow against the Oilers should Nemeth be available.

Gallant pleased with the kids

Playing Jones was one thing, but pairing him with fellow rookie Nils Lundkvist is another. Gerard Gallant showed gumption by playing the kids together.

“Those are two really good players. They know how to play hockey, they’ve done it a lot.”

Lundkvist and Jones showed chemistry off the hop. Early in the first period, Brayden Point made a world class move on Jones to get by him for a breakaway. Lundkvist recognizing the disadvantage skated towards Point to take away the middle and force an angle shot that went wide.

It was about the only mistake Jones made – if you consider having a superstar like Point fake you out on a deke a mistake. Remember, it was Artemi Panarin pulling a deke on potential Norris candidate Aaron Ekblad in Florida that directly led to a goal.

Despite that play, Gallant showed confidence in the kid giving him regular shifts. That isn’t surprising either with the way the coach spoke of him after cutting him before the season.

“He’s a young player, we like him a lot and he’s going to be in New York a lot,” he said. “But with the depth we’ve got on the blue line we have to make some tough decisions and that was a tough one.”

Another solid performance by Jones and Lundkvist against Edmonton will only make it tougher. 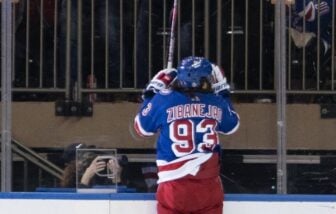