Six-time Stanley Cup Champion Mark Messier will be joining his buddy Wayne Gretzky in the TV analyst game next season. ESPN announced a multi-year agreement with him as a studio analyst on ABC, ESPN, ESPN+ and Hulu.

Mark Messier is no stranger to the bright lights and cameras as he led the New York Rangers to their first Stanley Cup in 54 years in 1994. After his playing days, Messier did some TV work appearing on Versus, NBC, and Rogers for Canada.

“The game of hockey, and the NHL, have afforded me enormous opportunity, success and experiences on the ice and in my life,” said Messier. “My passion for the game is as strong as it has ever been and I am looking forward to sharing that passion, plus my insights and analysis with the sport’s incredible fans. The NHL is beginning a new era with ESPN and The Walt Disney Company — with an exciting, evolving game and phenomenally talented players — and I am thrilled to be a part of the team.”

Wayne Gretzky will be joining TNT’s coverage next season. 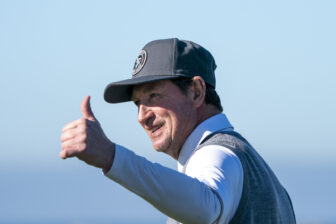 Older hockey fans like yours truly will remember ESPN’s coverage of the NHL. It was a big deal while it lasted and they had one of the best theme songs in Sports Broadcasting of any sport.

Now that the new deal is done, ESPN will be broadcasting hockey again.

So who is rumored to be on the broadcast team? Per Sean Shapiro, we should be seeing more of John Buccigross, Steve Levy, Linda Cohn and Barry Melrose on air. Gary Thorne will be back in a play by play role. ESPN’s top two hockey writers Emily Kaplan and Greg Wyshynski will be featured as panelists on “Around the Horn”.

We can now add Mark Messier to the mix.

This article was first published at The Daily Goal Horn