New York Rangers in on Mark Giordano; Rickard Rakell worth a first round pick

The NHL Trade Market is heating up and the New York Rangers are reportedly in on trying to acquire Mark Giordano from the Seattle Kraken. Two other teams also in the mix are the Toronto Maple Leafs and Carolina Hurricanes.

Florida was believed involved but just unloaded their first round pick and more to acquire Ben Chiarot from the Montreal Canadiens.

Rangers in on Mark Giordano; Rickard Rakell worth a first round pick

Seattle Kraken captain is being held out of the lineup in anticipation of a trade. Giordano also has a no-move clause and will have a say in where he goes.

The New York Rangers interest in Giordano dates back to the offseason, but Forever Blueshirts has learned that the veteran defenseman’s destination of choice would be the Maple Leafs.

Giordano, 38, is a Toronto native and will be a pending UFA this summer. He’s registered 23 points in 55 games this season.

As for Rickard Rakell, Pat Verbeek is seeking a first round pick for the Ducks. If the Rangers want him, they will have to give it up.

Calle Jarnkrok was just traded from Seattle to Calgary for a 2nd-round pick in 2022, a 3rd-rd pick in 2023 and a 7th rd-pick in 2024. Seattle also retained 50% of his salary but that’s quite the haul for a bottom six forward.

Stay tuned as things are really getting going now. 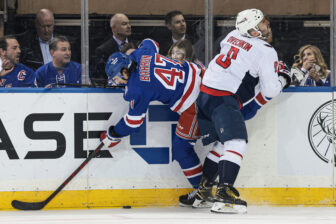 Tomas Hertl just signed an 8 year extension with the Sharks and is officially off the board. Read more.