New York Rangers need J.T. Miller, but he isn’t worth the trade cost 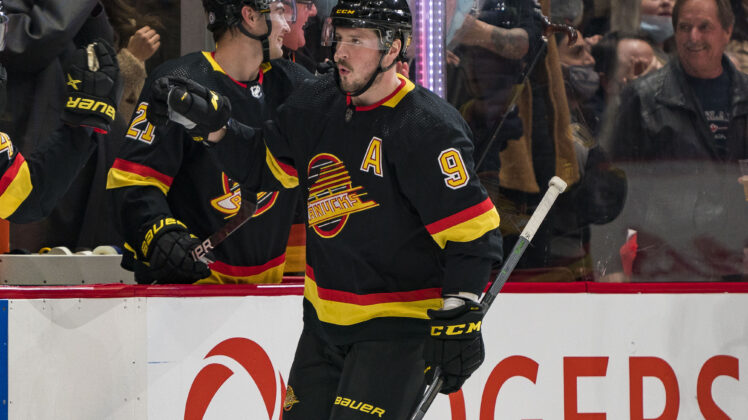 There’s been a lot of talk around a J.T Miller reunion with the New York Rangers that it’s confounding as to why he was ever traded in the first place.

He’s exactly what they need right now to compete for a Stanley Cup. Miller can play any forward position, in all three zones, and all situations. Miller scores the fancy goals, and then gets right in the paint to score the gritty ones.

However, despite being everything the Rangers need, he isn’t worth the king’s ransom the Canucks want teams to pay.

The New York Rangers are so hot for J.T. Miller it makes you wonder why he was a throw-in when they moved Ryan McDonagh to the Tampa Bay Lightning in 2018. Yes, the team announced a rebuild and they were looking for future assets, but Miller is exactly the type of player they should have kept.

Instead, he was jettisoned due to salary cap concerns as he was coming up on a new deal. Flash forward four years later and the Rangers would have to give up a boatload of assets to acquire him.

Miller, 28, has 20 goals and 60 points in 53 games this season. That would make him the Rangers leading scorer, 4 points up on Artemi Panarin.

Larry Brooks touched on the topic in his latest for Post Sports+ saying: “The Rangers need J.T. Miller, that is not up for debate. The question is: Can they get him at an affordable price?”

The simple answer is they can’t.

The Canucks have a great shot at making the playoffs and Miller is leading them there along with goalie, Thatcher Demko. Canadian teams have been hit hardest financially from the pandemic and the revenue from playoff games is probably more important than trading away their leading scorer, who still has a year left on his contract at $5.25M.

“I checked with a couple NHL front offices over the past few days who feel that when they talk to Vancouver lately, it feels like J.T. Miller has been reeled back in by the Canucks,” Pierre LeBrun stated on Insider Trading. “Now, we’re a month away from the trade deadline, so perhaps a bit of cat and mouse, but I think the message is clear from the Vancouver Canucks to other teams, they don’t feel they have to trade J.T. Miller. He’s got a year-and-a-half left on his deal and this notion that J.T. Miller’s worth is higher now than it would be this summer, the Canucks’ front office does not believe that.”

Vancouver isn’t going to trade him unless they get the king’s ransom they are looking for, which is said to be similar to what the Sabres were asking for Jack Eichel.

Is he really worth more than Jack Eichel? The answer is no, even though he is having a phenomenal season.

The Golden Knights gave up four pieces to acquire a player that the entire league knew was never going to play for Buffalo again. Vegas sent Peyton Krebs, Alex Tuch, a 1st rd pick in 2022 (top 10 protected), and a 3rd in 2023 to acquire Eichel and a 3rd round pick.

Using that as a benchmark, what are we thinking it’ll take for the Rangers to get Miller? Filip Chytil, Nils Lundkvist, a first and a third? Let me say this, if the Canucks would accept that, I’d say go ahead. Unfortunately, they won’t as they want Braden Schneider in and package.

While both Chytil and Lundkvist are promising, fans tend to overvalue their own players. Chytil is an arguable bust compared to Alex Tuch. Chytil has 83 points in 227 games compared to Tuch’s 161in 277 contests.

Move on from J.T. Miller

I have been a huge fan of the game Miller plays. This dates back to his days as a member of the Rangers struggling to get out of Alain Vigneault’s doghouse on most nights. Yet here I am saying the team needs to move on.

The Rangers can take the assets mentioned and use them to get two rental forwards at the Trade Deadline. Gerard Gallant is doing the best he can with what he has. What he needs is another top six winger and a two-way center to man the third line.

Rookie GM Chris Drury also can’t blow all his assets for one player, whom they may be trading at the next deadline anyway for cap reasons.

So unless that price comes down drastically, the Rangers need to move on.

In the long run, the team would be better served with some lower cost deadline rentals to make a run at the Cup this season. That way it will give them tremendous flexibility in the offseason to make potentially bigger moves going forward.