The New York Rangers and Colorado Avalanche combined for a grand total of 90 shots. They then added four rounds in the shootout for good measure.

It was a goaltending clinic that probably made coach Benoit Allaire extremely proud. Igor Shesterkin stopped 42 of 44 shots, while his former backup Alexandar Georgiev halted 44 of 46.

“It sure was,” Gerard Gallant said of the goalie duel. “They both made some unbelievable saves.”

In the end, Georgiev was able to stop Alexis Lafrenière on the final shootout attempt to secure a 3-2 win in his first game back at Madison Square Garden against his former team.

“Doesn’t get much better than that type of shootout win, and the building is awesome,” he explained. “It brought (back) a lot of good memories. But for me, it was just playing the game and letting it come to me.”

“It was a great game for both goalies,” a victorious Georgiev said. “Pretty memorable one and I’ll try and enjoy this tonight. We have a lot of big games coming up.”

The undrafted goalie has been battling ever since he came into the NHL when he signed as a free agent with the Rangers on July 17, 2017.

Starting off as Henrik Lundqvist’s understudy, he learned from one of the league’s best. In his mind, Georgiev was preparing himself to eventually take over as the team’s starting goaltender. It didn’t work out that way and after five years on Broadway, he was traded to the Avs this summer.

In fairness to Georgiev, the Rangers went from one Vezina winner to another in Igor Shesterkin.

“Yes, he did good,” Igor complimented Georgiev on his performance. “But I need to focus on my game. It was a bad shootout and the second goal was completely on me.”

Shesterkin, 26, was brilliant in his own right against the high-flying Avs. He also had the save of the game when he stopped Mikko Rantanen with a diving stretch on a breakaway.

Unfortunately, he committed an uncharacteristic gaffe while playing the puck way out of his crease during the team’s man advantage to start the third period. Andrew Cogliano’s forecheck caused a turnover and with Shesterkin scrambled back to the crease, Logan O’Connor scored shorthanded to give the Avs a 2-1 lead.

“He made one mistake in two years,” Gallant absolved his goalie. “I didn’t even see what happened to be honest with you. I just saw he had the puck in the corner. It happens, we’ll get over it.”

Given another opportunity, I don’t think Shesterkin will make the same mistake twice.

“It was a good game,” Shesterkin said afterwards. “One goalie saved a shot and the other one missed a shot. That’s the difference.”

In the end, both goalies played their hearts out and the NHL got a taste of what a possible Stanley Cup Final could be between these two teams. 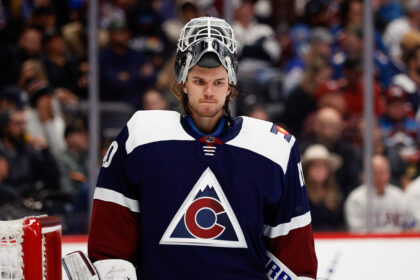