New York Rangers PK should be strong despite personnel changes

The New York Rangers PK was the 7th best in the NHL during the 2021-22 season. Despite a change in key personnel to the penalty kill units, they stand to be just as good, if not better this year.

Gone from last season are the following penalty killers:

So just how good was the New York Rangers PK last season? Here’s the key stats you need to know:

For a more in-depth look at who the Rangers relied on to kill penalties, I compiled a list using data from NHL.com and then sorted it by shorthanded time on ice per games played (SH TOI/GP).

Note: Players in Bold and Italics are no longer on the team

The Rangers top three penalty killers remain on the team but with Kevin Rooney gone via free agency, a center needs to step up to fill that role.

That’s where Vincent Trocheck steps in. Of course, when seeking Andrew Copp and Tyler Motte’s replacements, you simply need look no further than Ryan Carpenter and Jimmy Vesey.

Below you will see just what those three did last year on the PK sorted by SH TOI/GP:

While training camp battles continue, based on the information above, it’s hard not to see both Ryan Carpenter and Jimmy Vesey NOT making the team.

The Rangers may also experiment giving players like Alexis Lafreniere and Kaapo Kakko some time on the PK. However, the core group seems evident so it’s just about getting them familiar with the possibility.

As for Nemeth’s replacement on defense, you can expect to see more K’Andre Miller and Braden Schneider going forward.

At the end of the day, the Rangers still have their biggest offensive threats on the PK in Mika Zibanejad and Chris Kreider. A Trocheck pairing with Goodrow has the potential to also be lethal.

Bottom line, the Rangers have the personnel here to be better than they were last season and that should have fans giddy. 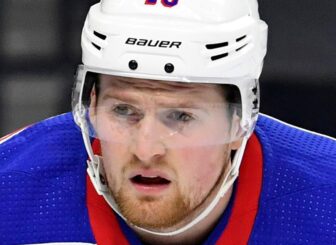