The New York Rangers will kick off their first of six preseason games on the schedule. Tonight the opponent is the rival New York Islanders and head coach Gerard Gallant would like to see his charges play hard.

“It’s our first game of the preseason and you want to work hard,” Gallant said today. “You have to play the game so you might as well try and win the game.”

When the New York Rangers step onto Madison Square Garden ice Monday night, it will present an opportunity for a few players fighting to make the team with only a few slots available.

“The message is different for a lot of different players,” Gerard Gallant said on Sunday. “Some guys don’t have to make the team and other guys better play their tails off.”

Those “other guys” Gallant is speaking of that are confirmed for tonight’s lineup are defensemen Zac Jones, Libor Hajek, and Andy Welinksi. All three are fighting for the 6th and 7th spots on defense. As for the forwards, Bobby Trivigno, Gustav Rydahl, and PTO invite Jimmy Vesey are really competing for a role on the bottom six.

A few players could lose their spot in the projected lineup with poor showings in preseason action are Ryan Carpenter, Ryan Reaves, and Vitali Kravtsov. Meanwhile the kids Brennan Othmann and Adam Sykora are unlikely to make it no matter what they do based on AHL ineligibility.

New York Rangers that are fighting for a spot

Vesey, who is on his second trip with the Rangers, could play a vital role on the team if he makes the roster. He is an asset on the penalty killing unit which is an area that needs help after losing players like Kevin Rooney, Andrew Copp, and Greg McKegg to free agency.

“I know what type of player [Vesey] is,” Gallant explained. “We’ll see where he fits at the end of camp. He’s a good skater, PK guy, and he looks pretty good out there.”

While Vesey is a versatile player with some offensive skills, the Rangers head coach praised another forward as a standout in the first few days of camp.

Hunt, 26, played last season in New York recording 6 goals and 17 points in 76 games. But when the playoffs started, he only appeared in three contests.

As for Gustav Rydahl, he’s is a 27 year-old free agent signing out of Sweden that will look to put his best foot forward to make an impression. He along with Veesy and Hunt, who will play later this week are presumably trying to win what will be the 13th forward slot.

On defense, Jones and Hajek are believed to be competing for the sixth and seventh spots. They along with Matthew Robertson and PTO invite Matt Bartkowski are in the mix.

Rookie prospects Brenan Othmann and Adam Sykora will play with Rydahl in the game. It is unlikely either of these two rookies will make the team out of camp, but the experience they gain will be invaluable to the future of the club.

Othmann, 19, scored 50 goals and 97 points in 66 games last season in the OHL. He then helped Canada win Gold at the World Junior Championship in August with 6 points in 6 contests. However, the Rangers 1st round pick of 2021 is learning he’ll need to take it up a notch to make the NHL.

“I’ve been on the same team with (Chris) Kreider the last three says and just the work ethic that he brings is second to none,” Othmann relayed. “He’s a New York Rangers and he can take it easy, but he’s working his ass off, and that’s just something a younger guy like me looks up to.”

Sykora, 18, will be heading back to Nitra in Slovakia at some point but the 2022 2nd round pick is ready to get under some Islanders’ skin tonight.

“It will be special for me to be a part of this team,” Sykora said. “I will prepare for this game mentally and physically because it will be hard.”

The preseason allows the coaching staff to experiment with different line combinations in a different capacity than what was used in the scrimmages last week. The projected lines for Monday’s game are:

Head coach Gallant does have an idea of how his lines will look come opening night but understands that things could change through a short preseason schedule.

I got a pretty good idea what I like best right now, but we’ll see,” he said. “Things change day to day in this game. People get hurt. Some people play really well and makes you make decisions. But we have a pretty good idea, I do, what I’d like to see.”

This is Igor Shesterkin’s team. The 2022 Vezina Trophy winner has no one looming over his shoulder, nor has to listen to the bickering of a goalie who never felt comfortable in the role of back-up this season.

Shesterkin is starting in goal tonight with Dylan Garand likely to play in the second half. This season, the backup spot will likely be filled by Jaroslav Halak, but the club also has Louis Domingue (played last season for Pittsburgh) to add some competitive value to camp.

Following Monday’s game, the Blueshirts will play back-to-back games against the New Jersey Devils. The first of these games will be on Thursday at MSG and then Friday at the Prudential Center. 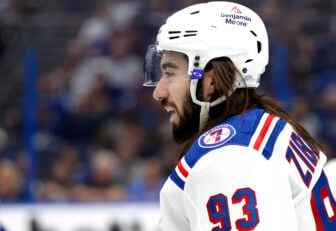