The New York Rangers are loving what they are seeing out of their prospects as of late.

At the top of that list is 2021 first round pick, Brennan Othmann. His OHL team the Flint Firebirds have had to deal with a COVID postponement, but he’s been one of the top prospects this season.

This season, he has certainly elevated his play as he is tied for 5th in scoring with 36 points in 31 games. His 26 assists are good for third in the Western Hockey League. Korczak scored a career high 67 points in 62 games for Moose Jaw in 2019-20 and may well be on his way to passing those numbers.

The Yorkton, Saskatchewan notice is one prospect to keep an eye on.

“I am super honored to be drafted by the New York Rangers,” Korczak told us in September. “I was super happy at camp and to share the ice with so many great players. It was nice spending time with people other than your immediate family.”

The New York Rangers selected Brett Berard in the 5th round pick (134 overall) of the 2020 Draft.

He may be small at 5-9 but plays a big and agitating game with speed. The 19 year-old has 24 points in 21 games for Providence College this season and was recently named to Team USA for the World Junior Championships.

“I committed when I was pretty young, but my mom was a field hockey player there and as I said, my dad was a hockey goalie there and he coached there,” Berard told us about his decision to join the Friars program. “I grew up around that campus and they were the first school to talk to me. It was easy to accept.”

Will Cuylle to World Juniors

Will Cuylle is having a spectacular season that began with being named the captain of the Windsor Spitfires. Now he will be representing Team Canada at the WJC, ready to face Brett Berard.

“The Spitfires are excited for Captain Will Cuylle to represent Team Canada on the world stage at this years World Junior Championship!,” the team posted. “Way to go, Will!”

The Blueshirts drafted Cuylle in the 2020 draft, in the second round (60th overall). The pick was acquired from the L.A. Kings in exchange for Lias Andersson. The 6-3, 212 lbs, 19 year-old winger had an impressive training camp before being sent back to the OHL. 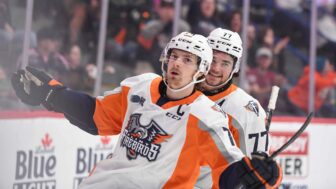