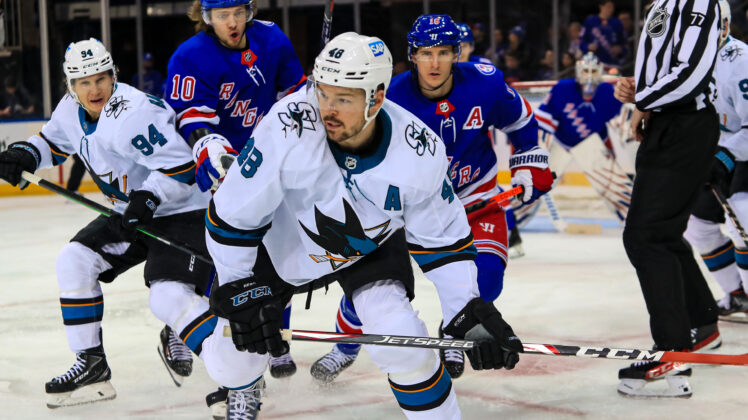 The New York Rangers are currently one of the top teams in the NHL and are in great position to make the playoffs. As more experts contemplate if the team is ready to compete for the Stanley Cup this season, to a man the team believes they are.

Although the NHL Trade Deadline is still a significant time away (March 21), there are still far too many teams that believe they are in contention. Regardless, when the time comes we know that Blueshirts will be buyers and looking to add key pieces.

One team that is teetering on the playoffs are the San Jose Sharks. They currently hold the last wild card spot by two points over the Flames and four over the Jets. However, both teams have five games in hand on them.

That leaves a certain pending UFA as a primary target for the New York Rangers.

Per multiple reports, the Sharks told inquiring teams in the offseason that they were still hopeful to work things out. That still holds true today, but if a deal can’t be worked out he will be moved at the deadline.

When it comes to whom is the most likely suitor to land Hertl services, top insiders look at the Blueshirts.

“Hertl has emerged as the likely most in-demand player as we hurdle toward the deadline.. and would provide a significant return for the Sharks’ future,” Frank Seravalli said. “One team to keep an eye on in the Hertl sweepstakes: the New York Rangers.”

Hertl would be a great fit for a playoff run as he can play either center or wing. New York would have to part with a first round pick and more to acquire his services.

“He has almost a 100 per cent no-trade clause,” Pierre LeBrun noted. “Only three teams are on his “yes” list. He has lots of control and one team to keep an eye on is the New York Rangers, who I think have him on their list.”

Other potential rental candidates include Phil Kessel in Arizona, Reilly Smith in Vegas, and Claude Giroux in Philadelphia.

Rangers “all over” J.T. Miller

Miller, 28, has one more year left on his deal worth $5.25M before becoming a UFA. He’s also been extremely productive with 38 points in 38 games for Vancouver this season.

“One of the teams that has really been all over J.T. Miller to bring him back is the New York Rangers,” Seravalli said on Canucks Central.  “Are there younger pieces on the Rangers’ roster that they’d be willing to part with rather than just draft picks? And how important would it be for them to be in a spot where they have that extra year of J.T. Miller and not have to sweat (what his next contract) looks like.”

Recently, Jim Rutherford addressed the media to explain what the organization’s approach will be regarding trades.

“I don’t believe it has to be a rebuild. But certainly the team has to be transitioned into a stronger team to be a regular playoff team,” Rutherford said via The Province. So Seravalli’s suggestion aligns with Rutherford’s philosophy.

The Rangers traded Miller back in 2018 in the Ryan McDonagh blockbuster. He was actually added to get back additional pieces, one being Libor Hajek. However, it was also a cap move as the Rangers were predicting Miller’s next contract to be something they didn’t want to commit too.

Of course, the Rangers acquiring Miller would likely mean that they will see him as a replacement for Ryan Strome if they fail to reach an extension by the deadline.

Miller is primarily a winger but can play center. Keep your eye on this one because it has ramifications for other possible moves.

Marek also added the Los Angeles Kings, St. Louis Blues, and Anaheim Ducks have the prospects and desire to make that deal. The Florida Panthers are also believed to be heavily chasing him.

That brings me to the Rangers. GM Chris Drury knows he has a contender on his hands but cap constraints will make it difficult to keep key free agents and RFAs. They are overloaded with young players and prospects and would love someone like Chychrun to pair with Jacob Trouba.

The package would be significant, but the Rangers could do it.

Would a deal that centered around young K’Andre Miller, whom Chychrun would replace, along with Filip Chytil, and a first round pick get it done? Could Arizona consider Zac Jones or even Nils Lundkvist over Miller.

Miller has the size, speed, and talent to be a top-four defenseman. But for where the Rangers are right now, Chychrun paired with Trouba would be a 1A-1B pairing to Adam Fox and Ryan Lindgren.

Plus, from a cap standpoint it makes even more sense over the next few seasons once Adam Fox and Mika Zibanejad’s extensions kick in. There’s significant value in Chychrun’s cost controlled salary.

Miller and Alexis Lafreniere’s ELC’s will expire in 2023.

In reality, the Blueshirts are more likely to look at the rental market for a defenseman, and my sources tell me that Seattle’s Mark Giordano is their top choice.

The Boston Bruins have to contend with a now public trade request from rugged winger Jake DeBrusk.

This caused Sportsnet’s Jeff Marek to ponder: “Could a deal for Rangers forward Filip Chytil make sense for both sides?”

Chytil is talented, there’s no doubting that. Although he continues to struggle down the middle and seems better fitted for the wing. He will be an RFA next summer, as will DeBrusk.

While the thought is interesting, I don’t see DeBrusk as a fit longterm. Especially with his current cap hit of $3.675M. That only means if the Rangers qualify him it will have to be for at least that much.