The New York Rangers salary cap is saddled with $3,427,778 in buyout penalties. Some of those are from buyouts that occurred all the way back in 2017.

That freed up cap space will come at a great time for at least one of the Blueshirts young pending restricted free agents.

Here’s a breakdown of buyouts the Rangers are still paying for:

Note: All cap data via CapFriendly

On June 14, 2017 the New York Rangers bought out the contract of Dan Girardi. At the time, the 10 year Blueshirts veteran had three years remaining on a contract that came with an AAV of $5.5 million.

The rugged shot-blocking defenseman was a warrior for the team during their Black and Blueshirts days. He was part of one of the top shutdown pairings in the NHL with Ryan McDonagh and helped the team reach the Stanley Cup Final in 2014.

Unfortunately, his body could not hold up to the wear and tear. Girardi’s game started to decline at the end of the 2015 campaign.

The Rangers bought out the contract of Kevin Shattenkirk on August 1, 2019. This was a shocking turn of events, considering he was a prized free agent in 2017 and signed with the team for less money than others offered.

New York bought out the final two years of his four-year deal that came with a $6.65 million cap hit. They obviously needed the space after signing Artemi Panarin that summer to a monster 7-year contract with an $11.6 million AAV.

Sadly for Shattenkirk, he was playing on a bad knee for the most part with the Rangers. The offensive defenseman simply struggled in his own end trying to play top four minutes.

On July 24, 2021 the Rangers and Tony DeAngelo ended a tumultuous relationship.

After signing a two-year, $9.6 million contract extension in October 2020, he could not stay out of trouble with his coach and teammates. After an early season scratch, things came to a head when he was involved in a reported altercation with goaltender Alexandar Georgiev.

Previous GM Jeff Gorton warned DeAngelo prior to the incident that any issue would lead to that being an end to his Rangers career. After just six games, he would not play for the Blueshirts again.

The buyout was for one-third of the remaining contract because DeAngelo was younger than 26. The Rangers cap hit last season was for $383,334 and ends with $883,334 this year.

The New York Rangers will have the following players become restricted free agents in 2023:

It should also be noted that Ryan Reaves and his $1.75 million cap hit will be off the books. In addition, Jaroslav Halak’s $1.5 million is gone too, but the Rangers will need that money for another backup.

Looking at the $3.4 million in dead cap space coupled with Reaves’ $1.75 million gives you a little over $5 million.

The New York Rangers should take between $4M to $5M and ink K’Andre Miller to a five-year deal.

As for the rest of the RFAs, only Alexis Lafrenière will be a lock to return with Filip Chytil to a lesser extent.

How will the Rangers sign them? That’s why you hear the term ‘cap squeeze’ used so often when discussing the team’s future.

It’s not an easy problem to solve and likely means certain players like Barclay Goodrow, who has a modified trade clause could be at risk next summer. The Rangers could also ask Jacob Trouba or Chris Kreider to waive their full no-move clauses, but that will be a challenge. 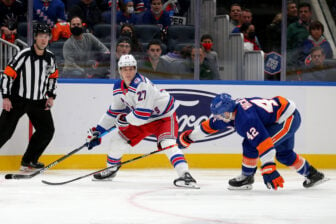 Also Read:
What should the New York Rangers do with Nils Lundkvist?