Head coach Gerard Gallant changed the schedule for the New York Rangers after a four hour and 38 minute triple overtime affair against the Pittsburgh Penguins on Tuesday night.

The team was supposed to skate but were given the day off.

What the Blueshirts didn’t do today was whine or lick their wounds about the 4-3 loss when they had every right too.

“Move on– get ready for the next,” Gallant said. “It’s no big deal. We would’ve love to win it but you have to battle back and win the next one.”

There was plenty of controversy in the first game of the series. New York being given just one power play during the first period of a six period affair for starters. Pittsburgh received four power plays. Including a two-man advantage on a questionable boarding call to Jacob Trouba right after Chris Kreider regained the lead with a shorthanded goal.

“There probably should’ve been a couple of calls made when you look back,” Gallant noted. “We’re not going to complain. Obviously disappointed they got that 5 on 3. That wasn’t the difference in the hockey game.”

A disallowed goal was a major turning point in the game. Kaapo Kakko was shoved into Penguins goalie Casey DeSmith by Brian Dumoulin, resulting in Filip Chytil’s goal being overturned.

Defenseman Ryan Lindgren left the game with a lower-body at the start of the third, but eventually came back before a permanent exit after the second overtime.

In the team’s final game of the season, a 3-2 win over the Washington Capitals, Lindgren got tangled up with a Caps player and visibly limped off the ice. So it’s possible he came into the game a little worse for wear.

“He’s banged up a little bit but he’ll be there tomorrow,” Gallant said. “Maintenance and get ready for playoff games. That’s the way it’s going to be for a lot of players.”

The head coach was also asked about his goaltenders well-being.

Igor Shesterkin set a franchise record for saves in a playoff game with 79 on 83 shots in the loss. It was also the second most saves in NHL history behind Columbus’ Joonas Korpisalo set on August 11, 2020 against Tampa Bay.

“He’s great,” Gallant said of his number one. “No issues with him after 83 shots, but he’s been doing that all season for us.”

The Penguins may have won the game, but the Rangers won the physical battle as injuries are mounting for Pittsburgh.

Tristan Jarry was ruled out for the first two games of this series with a lower-body injury. His replacement, Casey DeSmith pulled himself out of the game, which many speculated as possible cramping but seems to be more.

“Casey is being evaluated today. Right now his status is day-to-day,” Penguins coach Mike Sullivan said. “Tristan Jarry did not skate today, but he’s continuing his rehab off the ice.”

In response, the Penguins have called up Alex D’Orio from their AHL club to back up Louis Domingue.

Late in the first period, Lindgren caught Rickard Rakell with his head down and knocked him out of the game. He joins Jason Zucker as another injured forward.

“Rakell is being evaluated. His status is day-to-day until we get more information,” Sullivan added. “Zucker skated today with the group, he’s day-to-day.” 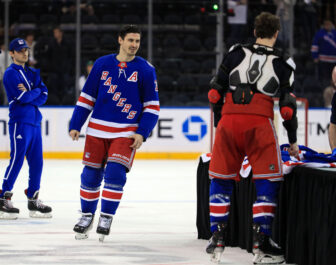 Check out all the NHL Playoff Action. Including TV Schedules, Lineup, and injury news. Read More.