The New York Rangers said they moved on from the Tom Wilson incident that saw their best player Artemi Panarin tossed around the ice like a dog’s chew toy. They’ve held firm to that stance since the first game of the season, which was a 5-1 drubbing against Wilson and the Capitals.

Rangers not thinking about Tom Wilson

As the two teams square off in a pivotal four-point contest that could see the Rangers either up by six or just two depending on the outcome, they’re rightfully not concerning themselves with Wilson.

Albeit, his 15 goals and 34 points in 48 games this season is something they need to be aware of, the Rangers won’t waste a second thought on if he’ll run someone.

“We never talked about it once,” Gallant said on Wednesday. “I really think there’s nothing. It’s just another game against a team that’s a rival, a division opponent that’s a few points behind us and that’s what’s important.”

Chris Kreider, who was seen having a laugh with Wilson during the All-Star Break was asked about that by the press. He quickly responded that he was being a professional and that players can be friendly off the ice and away from the game.

“The minute the puck’s dropped, the only friends out there are the guys wearing the same jersey as you,” Kreider explained. “I think that’s what being a pro is all about. It’s being able to respect one another and converse with one another away from the ice but obviously doing your job and battling incredibly hard and being competitive when you’re playing that game.”

The Rangers certainly are not the same team as was constituted with Wilson went wild and took those liberties. Players like Barclay Goodrow and Ryan Reaves have certainly changed that dynamic.

Reaves in particular has done an amazing job keeping the opposition in check. The rugged forward is listed at 6-foot-2 and 225 pounds. He also has 72 fighting majors to his credit and is just the type of player the Rangers lacked in the May 3rd game that saw Wilson punch a prone Pavel Buchnevich in the back of the head before rag dolling Artemi Panarin.

Tonight, the two teams will square off again with hockey first on the mind. The Rangers will still need to be leary of Tom Wilson, especially on the scoresheet. However, if the score is lopsided in the Blueshirts favor they’ll need to keep their head on a swivel whenever Wilson is out there.

Having Reaves too patrol the ice certainly provides some comfort, but they’ll need to beware of Wilson nonetheless. 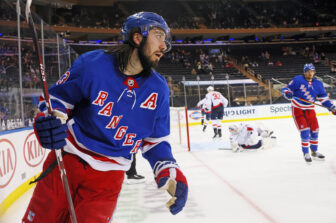 Also Read:
How to watch Rangers vs Capitals tonight, plus matchup notes