The New York Rangers have had an up and down season in 2022-23 after an excellent campaign last year where they went to the Eastern Conference Final.

Currently, this team is on an up swing after winning three straight including their first third period rally for a victory versus the Blues. The Blueshirts then followed it up with two big road wins against the Vegas Golden Knights and Colorado Avalanche, who are both considered top Cup contenders.

At 14-10-5, the Rangers 33 points places them fifth in the ultra-competitive Metropolitan Division just three points behind the Carolina Hurricanes for second. They also hold the last wild card spot by one point over the Detroit Red Wings.

With the Christmas Break just around the corner, let’s check the top storylines surrounding the team.

Kravtsov will be 23 years old on December 23 and once again finds himself out of the lineup. Whether it be due to injuries or Gerard Gallant not seeing the talented forward as a fit, he’s only dressed for 10 out the team’s 20 games this season garnering two points (1G – 1A).

This was always going to be an uphill battle for Kravtsov after he requested a trade before the start of last season and went to go play in the KHL instead of reporting to the Hartford Wolf Pack.

At this point, Kravtsov is the team’s 13th forward with very little chance of cracking the lineup unless there’s an injury. The Rangers can’t send him down to Hartford because he’s no longer waivers exempt and trading him now will garner no more than a second round pick according to knowledgeable sources.

While this isn’t really impacting the Rangers play on the ice, it’s an interesting storyline going forward. What is the future of the former first round pick, 9th overall in the 2018 draft? The question will only become more complex this summer as they may be forced to trade the rights of a restricted free agent who will unlikely want to re-sign.

Alexis Lafreniere and Kaapo Kakko are currently playing on the top line with Mika Zibanejad. It’s a trio of first round picks with the elder statesman selected the lowest at sixth overall. Lafreniere and Kakko were chosen first and second overall respectively.

Since Gallant made the switch during the second period of the comeback win against the Blues on Monday, the ‘Kids’ have look energized and not out of place playing big minutes 5v5.

Lafreniere, 21, has two goals (both assisted by Zibanejad) and an assist and Kakko, also 21, scored a goal in the two and half games since the move.

Igor Shesterkin has been unnecessarily hard on himself this season.

After a loss against the Edmonton Oilers and the New Jersey Devils in late November, where the team fell apart in front of him, he simply put all the blame on himself.

“The goalie played a s–t game again,” Shesterkin said without a translator after surrendering at least a couple of wonky ones in a game the Blueshirts actually led 2-0 after 3:01 of play. “I’m ashamed.”

The reigning Vezina Trophy winner has not played up to last year’s standards but he’s been much better than his comments would lead you to believe.

Keep your eyes on young defenseman Braden Schneider, who now has four goals on the season and growing more confident with each passing game.

The 2020 first round pick, whom the Rangers traded up to acquire supplanted highly-touted prospect Nils Lundkvist last season. By doing so, he forced Lundkvist to be traded to the Dallas Stars.

Schneider, 21, has a total of 7 points in 29 games to date but those numbers should continue to improve. More importantly, he’s excellent defensively with the size and speed to hang with the NHL’s best. 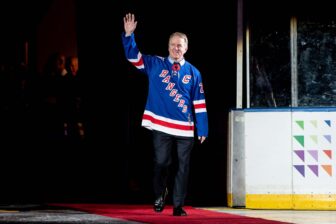