The New York Rangers are looking to put an awful third period and overtime against the San Jose Sharks behind them when they face the Columbus Blue Jackets on Sunday.

“We were in good shape, we played well, but that third period, I have no idea where that came from,” Rangers coach Gerard Gallant said. “I have no idea what went wrong. It was just a total collapse. It was embarrassing, actually.”

The team got back to work on Saturday afternoon for a crisp practice with Gallant opting to put the anomaly behind them.

“I’m not concerned about it,” Gallant stated. “I was concerned the other night and not happy but we’re not going to play that bad in a period again. We’ll move on.”

When the Rangers ht the ice at the Garden, they could have Vitali Kravtsov back in the lineup.

The forward has been cleared to play since Monday after suffering an upper-body injury early in the opening game of the season. According to line rushes at practice, Kravtsov looks like he will play on the third line with Filip Chytil and Barclay Goodrow.

“He’s probably real anxious and wants to play,” Gallant said. “Kravy wants to be a good player but sometimes you’ve got to wait your turn. When you get it take advantage. We’re not sure what we’re going to do yet.”

Kravtsov, 22, is itching to get back in the Rangers lineup after playing a grand total of 88 seconds this season out of five Rangers games. The 9th overall pick in the 2018 NHL Draft has 4 points in 21 NHL games to date.

Note: No starter has been named

As for the Rangers, they want to get back on their horse and erase a subpar performance against the San Jose Sharks. A team that has just one win on seven tries this season, with that win coming at the Blueshirts’ expense.

“You look at successful teams they’re good defensively and when the offense comes it comes,” captain Jacob Trouba said. “We’re trying to create too much with defense jumping in when we don’t need to. It’s not an offensive free-for-all, it’s a hockey game. We’ve got to play defense too.”

“I think we were passing up shots, something we haven’t been doing through the first few games here,” Chris Kreider said.

The Rangers are still trying to recapture that level of play they had in their season-opening 3-1 win over the visiting Tampa Bay Lightning. Undoubtedly, their best performance of the 2022-23 campaign.

Panarin has at least one point in each of the Rangers’ first five games this season, the strongest start of his eight-year NHL career. He has three goals and eight assists.

While the team will need their offensive stars to continue to shine, they know that a complete game at both ends of the ice is paramount for long term success.

“We know what it looks like by now when it’s rolling well and the team is doing the right things on the ice and playing a direct game and not trying to make the prettiest play every time,” Barclay Goodrow said. “When we stray away from that, things tend to not go our way. That third period was kind of a prime example of that. Maybe the whole game in general.”

Both the Rangers and Blue Jackets are coming off losses. The Rangers fell 3-2 in overtime to the visiting San Jose Sharks on Thursday.

After winning two straight and taking a 2-0 lead on Saturday night, the Blue Jackets lost 6-3 to the visiting Pittsburgh Penguins.

Boone Jenner and Jack Roslovic scored the first two goals for Columbus. Rookie Kent Johnson scored his first career NHL goal to extend the lead to 3-1 in the second period.

Blue Jackets right winger Justin Danforth sustained an upper-body injury in the first period and did not return. 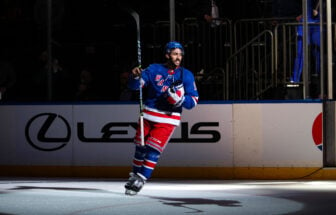