In the history of the All-Star Game, the New York Rangers have had many MVP performances. Tomorrow, Chris Kreider will be representing the Blueshirts and hoping to add to the team’s history at the NHL’s showcase event.

The Wales Conference edged the Campbell Conference 7-6 in East Rutherford, NJ. This All Star game was played at the old Brendan Byrne Arena and saw cross river rival Don Maloney of the NY Rangers win the game’s top honor with a 4 point performance.

This performance is over 30 years old and finding video and or photos of this game was difficult. The best I could come up with was this photo found on an Ebay auction!

Even though it’s literally considered ancient to the hi-tech generation, Don Maloney is the first ever Ranger to earn this honor.

As many were anticipating, 1999 was likely going to be the last season for #99. Wayne Gretzky played very well notching 3 points at the Ice Palace in Tampa Bay. This was also the second year where the format was changed to North America vs. the World.

Gretzky’s 3 points helped NA come out on top 8-6. In the 5 years this format was done, NA topped the World All Stars 3 times. It was a shining moment for the Great One in the twilight of his career.

In 18 All-Star Game appearances, Gretzky has 3 MVP awards, 25 points (13G-12A). Apparently, 1999 is considered ages ago as the only highlights I can find are in Russian.

Marian Gaborik playing for Team Chara scored a hat-trick in Ottawa. It was Gaborik’s shining moment as a Ranger and also sad foreshadowing for the 2014 Stanley Cup Final. Gaborik would score twice on fellow Ranger, Henrik Lundqvist.

“I was just fortunate to get lucky against him. I think he’s one of the best, if not the best, goalies in the League. I tried to get into his mind the whole weekend. It was a pretty good challenge against him.”

Gaborik’s performance against Lundqvist was a scene we would see often for him as a member of the L.A. Kings. He would help them march to the 2014 Stanley Cup at the expense of his good friend, Henrik Lundqvist. 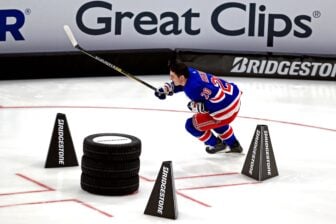 Okay, for the record Richter played only the second period and in normal circumstances we wouldn’t be screaming MVP in a regular season game. However, this was the All-Star Game and it took place at Madison Square Garden. Possible hometown favoritism aside, goalies are normally left out to dry in these games, making Richter’s performance really jaw-dropping.

The East beat the West 9-8 thanks to the stellar goaltending of Mike Richter who made incredible save after incredible save. The most popular was stopping Pavel Bure on a breakaway. Why was that so important? Because in the 1994 Stanley Cup Final, Bure was awarded a penalty shot and tried the same move that Richter stopped.

Mike Gartner opened the scoring with a deflection goal in front of Ed Belfour and the Wales Conference would go on to rout the Campbell Conference 16-6 at the Forum in Montreal.

This would be the last All-Star Game in which the format was Wales versus Campbell. Gartner went on to score 3 more goals using his speed and blistering shot that were trademarks for his career. 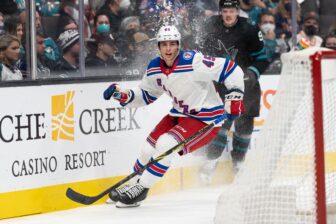