The NHL Trade Deadline is just one week away and as expected the New York Rangers are going to be buyers and involved in several trade rumors.

General Manager Chris Drury is looking bolster his lineup for the playoffs and there’s a lot of indication that he’ll be very busy. New York may not be landing some of the bigger rentals like Claude Giroux, but they may make several deals this week.

Here’s a breakdown of trade targets.

Rickard Rakell, 28, is a right wing that is currently playing on the Ducks third line due to the emergence of Troy Terry. The pending UFA forward has 16 goals and 28 points in 51 games and has become the Rangers top trade target. His current cap hit is $3.8 million and would really help the Rangers scoring issues. Latest buzz has Vitali Kravtsov as the centerpiece for a Rakell deal.

Phil Kessel, 34, is a pending UFA and considered a top rental. He is still productive with 35 points in 58 games for the Coyotes. The Rangers are believed to not be interested, but I was told they are certainly keeping tabs on the situation. If Rakell falls through Drury will likely make a play for Kessel to be on one of the top three lines.

Calle Jarnkrok, 30, is having a solid season with the Kraken and can play any forward position. He’s currently playing first line center, which should tell you all you need to know about the Kraken’s lowly position in the standing. He would be a great third line center for the playoffs. Jarnkrok has 26 points in 49 games. This is certainly a player that many teams want to add for the playoffs.

Ryan Carpenter, 31, is a pending UFA making $1 million. This season, he’s registered 11 points in 56 games with Chicago. He is a bottom six center that wins 52.6 of his draws and racked up 115 hits. Acquiring this physical forward would be an upgrade over Greg McKegg and solidify the 4th line.

Colin Miller, 29, is a pending UFA defenseman with the Buffalo Sabres making $3.875 million against the cap. This rugged lefty defenseman has 12 points in 32 games but is currently on IR after surgery to deal with a lower-body injury. He’s expected back this month.

Rangers also have these names on the radar

Ben Chiarot, 30, is pending UFA that has 18 points in 54 games and could play top four minutes on the left side for any playoff team. It is believed that asking price by the Habs for the rental defenseman starts with a first round pick and another prospect. Chris Drury is going to make a run a serious at him per a source. Will Jeff Gorton help his former assistant? The cost is likely going to be too prohibitive.

Mark Giordano, 38, has 23 points in 55 games for the Kraken. He is exactly what contending teams will be looking for at the deadline. The Rangers had their sights set on him in the offseason prior to signing Patrik Nemeth. They may attempt to acquire him for the playoffs, but the rumor mill has him heading back to Calgary either at the deadline or via free agency. This will cost Drury a first round pick if he wants him.

Max Domi, 27, is a pending UFA this summer with a cap hit of $5.3 million. The versatile forward can play center but has been used by Columbus primarily as a left wing. This season, he has 31 points in 50 games. This is another player that Drury is keeping tabs on, but will John Davidson help the man who took his job? The Rangers may need to deal their first round pick in another deal and Domi would be a great add. However, would you give up a Filip Chytil for a rental? I wouldn’t.

Reilly Smith, 30, is in the final year of his contract with a $5 million cap hit. He’s a perfect rental and has played for Gerard Gallant in the past. The forward has 38 points in 56 games this season but the Golden Knights will be using LTIR to keep him. Unless Mark Stone comes back before the deadline, Smith is staying put.

Artturi Lehkonen, 26, is scheduled to be a restricted free agent with arbitration rights. He has 28 points in 55 games this season. The former second round pick (55th overall) makes $2.3M on his current deal and could be a could fit beyond this season for the Rangers. He’s been playing well under new coach Marty St. Louis and is likely off the table now. However, if a deal were to be made between the two sides, it would be a standard hockey trade. So a roster piece would be going back to Montreal, not just draft picks. 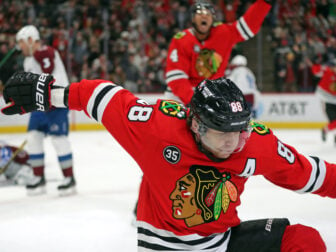 The latest Trade Bait Tracker has been updated. Check out who is the top target for teams with just one week before the NHL Trade Deadline. Read More.