The New York Rangers are well positioned to make the playoffs for the first time since 2016-2017. Word out in the rumor mill is that they will be buyers at the NHL Trade Deadline which is just 9 days away.

As per usual, the team has been attached to almost every big name that was speculated to be available including Vancouver Canucks forward J.T. Miller. That has died down in recent weeks after many realized that the Canucks ridiculous asking price was akin to not wanting to trade him.

Since then, the Rangers are looking at more affordable rentals like Rickard Rakell in Anaheim. Other adds could be bottom six forwards like Seattle’s Calle Jarnkrok. On defense, they are in the market for Montreal’s Ben Chiarot but it’s unlikely they will land him.

That means the Rangers will be able to save big trade chips like Nils Lundkvist for bigger fish this summer.

On Friday’s The Jeff Marek Show, the topic of a Patrick Kane trade was brought up with some interesting tidbits.

“This would involve Chicago eating some money assuredly,” Jeff Marek asked Elliotte Friedman. “Does [trading either Jonathan Toews or Patrick Kane] make sense to you?”

Friedman added that he feels it’s likely to be an offseason decision and not happening at this trade deadline. If you listened to Kane after interim GM Kyle Davidson was given the permanent job, there’s a real possibility of a trade this summer.

Kane, 33, is having another incredible season with 65 points in 55 games. Next season will be the final year of his contract that comes with a $10.5M AAV. The Buffalo, NY native has called Chicago his home for 15 years and recently spoke openly about where he’d like to be in the future.

“Let’s be honest, I love Chicago. I love the City and the fans,” Kane said. “I think there’s always business decisions. I know in the game of hockey there’s not many guys that play their whole career with one team. So it would be a privilege and an honor to do that. But I guess we’ll see how it all plays out.”

The Blackhawks top scorer said he has yet to speak with Davidson about his future but knows they will. Is it possible he could be traded? The answer is yes, but he has a full no-move clause and any transaction requires his blessing.

The Rangers have discussed the possibility of acquiring Kane and this summer they will know just how much Ryan Strome and Kaapo Kakko are looking for in salary. That may impact exactly how they approach and offseason trades.

Chris Drury or any other team for that matter, is going to ask Chicago to retain 50% of his salary to bring his cap hit to a manageable $5.25M next season.

That’s why if the Rangers want Kane at 50% it will cost them at least Kaapo Kakko, a first round pick, and probably one of their prospect defenseman. A hefty price indeed but realize Kane was going to return a nice package even if the Blackhawks didn’t retain a dime.

Let’s be serious, what did you think it was going to cost? A first round pick and Filip Chytil? Be real.

Patrick Kane is one of the NHL’s great players with 1153 points in 1084 games played. Not to mention 3 Stanley Cups, a Hart Trophy, an Art Ross Trophy, and a Conn Smythe. The Blackhawks would be foolish not to demand Kakko.

Here’s the reality of bringing in Artemi Panarin’s good friend, and Alexis Lafrenière childhood idol. You automatically bump Kakko out of a top six role for the next three to five years. Why would you bring in a player like Kane if not to play him on a line with Panarin? And Alexis Lafrenière is starting to show he’s a first line player in just his second here.

There’s now no room for Kakko and whatever salary demand the #2 overall pick in 2019 is going to demand.

The Rangers have some big decisions coming in the next 9 days. If they walk away from the trade deadline not giving up too much, it makes acquiring Patrick Kane this summer a real possibility. 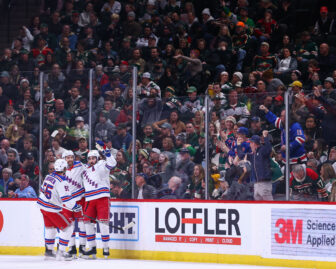 Also Read:
Should the New York Rangers go all in at the trade deadline?