New York Rangers Viva in Vegas with a 5-1 win

The New York Rangers started their brief two-game road trip with a big win against the Vegas Golden Knights, who are the third best team in the NHL.

“It was a real good game,” Gerrard Gallant said via the team’s YouTube channel. “I thought we played as solid a game as we played all year for sure.”

For the Blueshirts head coach, it was his first win versus his former team after going 0-1-1 last season against them. Gallant had served as their head coach for two and half seasons, which included a run to the Stanley Cup Final in their inaugural campaign in 2017-18.

“Obviously I’m happy to beat Vegas for the first time,” he added “More than that it was a big win for our group. We needed a win right now and it was a huge game for us.”

In what was probably the team’s best performance since their opening night victory over the Tampa Bay Lightning, the Blueshirts were strong for a full 60 minutes.

Playing an absolutely textbook road period, the Rangers outshot Vegas 15-5 and came away with the all important first goal.

Kaapo Kakko, who has been snakebit this season despite tons of great chances scored at the 6:49 mark of the opening frame to break an eight-game drought. His fifth goal of the season was made possible thanks to his hard work retrieving the puck and then deflecting K’Andre Miller’s point shot past Logan Thompson.

“If feels good,” Kakko said afterwards. “I saw [Miller] alone on the blue line and I just tried to get to the net and touch the puck.”

The Rangers did get into trouble in the second period when they took consecutive penalties just six seconds apart. Jonathan Marchessault basically scored into an empty net on the two-man advantage to knot the game heading into the third period.

It would be the only goal that Igor Shesterkin allowed as he stopped 25 of 26 Vegas shots and helped improve the Rangers excellent road record to 8-4-1 on the season.

Unlike many games over the course of the last few weeks, the Rangers didn’t wilt in the final stanza as they were able to score four goals on five shots in just a 5:36 span starting with a power play goal by Mika Zibanejad.

Just 24 seconds later, Filip Chytil scored the insurance marker that likely broke Vegas’ back when he converted a gorgeous feed from Barclay Goodrow. For Chytil, it was his first game back after missing two games with an injury.

“It was a good third period from us and we just have to keep going and play like this every game,” Chytil noted. “Goody gave me a good pass and I just put it behind the goalie.”

Alexis Lafreniere would add to Vegas’ misery as the team’s new first line continues to click. The first overall pick in 2020 notched his fifth goal of the year by showing some patience and hands to convert a nice cross-ice feed by Zibanejad.

Zibanejad capped the scoring with his second power play goal on a two-man advantage of their own and upping his totals to 15 goals on the year. Artemi Panarin notched his third assist of the game on the tally.

“We’ve got 1-1 going into the third on the road,” Zibanejad said. “We just regrouped and saw this as a good opportunity to get two points, play our game and that’s what we did.” 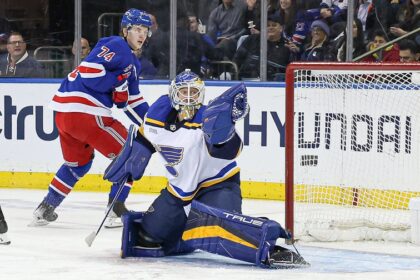