Former New York Rangers bench boss, John Tortorella is known for his fiery and confrontational attitude. He’s publicly displayed it with members of the media and some of his players on the bench.

Some players dislike him, and others would run through a wall for him. That’s been the case wherever he’s coached and was no different in his last stop with the Columbus Blue Jackets.

Recently, ESPN did a segment on Elvis Merzlikins and him honoring Mattis Kivlenieks who died tragically this past summer.

When the clip ended, John Tortorella was asked about his former goalie and struggled to get words out.

“What’s going through your mind Torts when you see that,” host John Buccigross asked about the video.

You’re talking about hockey, and he was just going to start his career as an NHLer” he began as he fought back tears. “I just don’t even think that. I see a 24 year-old kid that’s just starting his life. That’s hard.”

The Jackets also hung a No. 80 banner from the rafters of Nationwide Arena in Columbus ahead of Thursday’s home game against the Arizona Coyotes, where it will remain for the season.

Kivlenieks died at age 24 over Fourth of July weekend this summer. Members of the Columbus organization were attending a marriage celebration for goalie coach Manny Legace’s daughter. Kivlenieks was struck in the chest by a firework mortar and later succumbed to chest trauma.

Kivlenieks and the 27-year-old Merzlikins both hailed from Latvia, played the same position and, by all accounts, were close friends, with Merzlikins a mentor. At a memorial service for Kivlenieks in July, Merzlikins said Kivlenieks saved his life by getting in front of the oncoming firework as it headed toward Merzlikins and his pregnant wife. 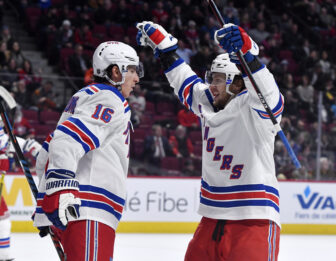