The New York Rangers will face-off against the Montreal Canadiens without Ryan Strome. Yesterday, the team announced the 28 year-old center will miss the game due to COVID protocols.

The Habs will also be playing their first home opener coming off a Stanley Cup Final appearance for the first time since 1993, so the crowd should factor in the game.

The Rangers, starting a four-game trip on Saturday, are winless through two games for the third time in five seasons. They allowed three power-play goals in a 5-1 loss to the host Washington Capitals and earned a point by overcoming a two-goal deficit in a 3-2 overtime loss to the Dallas Stars in Thursday’s home opener.

Chris Kreider and Adam Fox scored for the Rangers, who started slowly before coming on midway through the second period. The Rangers went 0-for-4 on their power play, including when they took five shots on their final man advantage in the third.

“We started playing more with the puck,” Kreider said. “We cycled. We were coming at them in waves. We were doing a good job of not turning pucks over, getting pucks to the net quickly, supporting each other, moving our feet. We have to do that for a full 60.”

Gerard Gallant has not announced as starting goaltender for this contest. The lineup without Strome should see third line center Filip Chytil move up to play between Artemi Panarin and Kaapo Kakko. The young pivot has no points in the early going of the season.

Through two games, this version of the Canadiens is not resembling a team with a chance at the Stanley Cup. They hope to rectify some of their early struggles Saturday night when they host the winless New York Rangers, who rarely win in Montreal.

Montreal is playing its first meaningful home game since Josh Anderson scored the game-winner 3:57 into overtime in Game 4 against the Tampa Bay Lightning on July 5. Montreal lost the series in five games — the same amount of games it took for them to win their last Stanley Cup in 1993.

The Canadiens began this season with eight players on injured reserve, including goaltender Carey Price.

With Price in the NHL/NHL Players’ Association joint player assistance program, Montreal is using Jake Allen and Sam Montembeault in goal. Allen drew the start when the Canadiens dropped a 2-1 decision to the Toronto Maple Leafs on Wednesday, and Montembeault allowed five goals on 36 shots in his Montreal debut during Thursday’s 5-1 loss to the Buffalo Sabres.

“It’s obviously early in the season, but these points at the beginning of the year are critical,” Montreal’s Brendan Gallagher said. “You don’t want to put yourself in a hole, so obviously to start 0-2, there’s a lot of urgency on the next one.”

Jack Eichel was reportedly close to being dealt and why does Kravtsov want out of the Rangers. Read more. 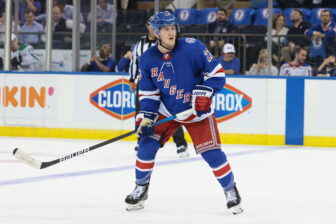