There may some form of progress in the Jack Eichel situation that could finally end in a trade. TSN’s Shawn Simpson is reporting that Eichel may have surgery “very soon” and his timetable to return would be December.

What is not understood is if the surgery is the team recommended fusion or the artificial disc replacement that Eichel wants.

Jack Eichel may have surgery soon

“I found out – there was a meeting in Buffalo, I might have my days off but I think it was Wednesday the 18th,” Elliotte Friedman reported on his most recent podcast. “The League was there, the Player’s Association, Eichel, and the Sabres. I’m not sure if the doctors were there in person or via Zoom, and everyone put their cards on the table. There was no resolution”

After that meeting, Eichel switched agents and hired Pat Brisson to get this moving in the right direction. That now appears to be happening.

One other thing that is not clear from Simpson’s report is what does “very soon” mean? Is the surgery scheduled for next week or next month? It remains unknown.

Also in Simpson’s report is that the Sabres are still asking for somewhere between 4-6 pieces. They continue to demand mostly futures, including any interested team’s top two prospects which no one has remotely been willing to do.

The move to Brisson may not lower the trade demands, but successful surgery and a return to play could get the Sabres something close to it.

Speaking with a former team executive, they agreed that the agent switch was the move Eichel needed to make. The exec called Brisson a “true professional” and just exactly what this situation needs.

With this news coming to light, it is starting to at least look like a resolution is truly in the works. FINALLY! 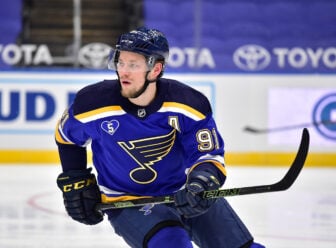 -This report was first published at The Daily Goal Horn