Sportsnet’s Mike Futa was a recent guest on Tim and Friends in Toronto and weighed in on the Jack Eichel situation. He was asked if he felt when this saga finally ends, will Eichel be on the Rangers.

“When (Sabres GM) Kevyn Adams talks about it, I don’t get for one second that he’s comfortable with the situation, but I do believe he holds all the cards,” Futa answered. “Probably because that’s where Eichel has made it quite clear it’s where he wants to be, that’s the last place the place in the world where Buffalo wants to trade him.”

Sabres don’t want to trade Eichel to the Rangers

Futa isn’t just a regular sports analyst, he was Assistant GM to the L.A. Kings and was their Director of Scouting for many years. L.A., along with Anaheim, Minnesota and Vegas are preferred destinations since they are in the Western Conference.

“I think Jack Eichel is still maybe one of six players that are absolutely phenomenal,” Futa continued. “Your entire franchise is based on it, the asking price is going to have to come down. There’s no chance I see a call back to Buffalo [for him to return]. That ship has sailed. And I still don’t know where he is health wise.”

The full interview is below.

Despite all of Steve Valiquette’s tingles that go along with his #FreeJack tweets, Chris Drury may really have no interest in acquiring the 24 year-old injured star.

The latest on Jack Eichel consists of no more than the ongoing blizzard of contradictory tales and innuendo posted on social media, some of which has come from the account of an MSG-Network analyst who is friendly with Drury. The Post reported via Twitter on Friday that the GM last week had been telling agents that he had never expressed serious interest in trading for Buffalo’s disaffected center and could not understand why the Rangers have been consistently linked to Eichel.

That could simply be Drury trying to minimize the team’s actual interest in order to help lower the asking price, or he means it. The Rangers did make an offer last offseason for Eichel but that was under John Davidson and Jeff Gorton. Broadway’s new President and GM may have a different plan.

Regardless, Mike Futa’s report aligns with previous ones that the owners of the Sabres don’t want to trade Eichel to the Rangers either.

The good news for everyone is that this could be coming to an end before the season starts. There appears to be some renewed interest from the Ducks who have the assets and cap space to make the deal.

At this point, even those who want Eichel on the Rangers just want this to be over. 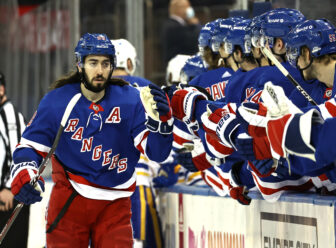 Henrik Lundqvist was close to rejoining the Caps. How close? Find out here.