Sabres would prefer not to trade Jack Eichel to the Rangers

The Sabres don’t want to trade Jack Eichel to the New York Rangers. That is a growing theme in the NHL rumor mill. However, if the decision is to move Eichel, why cut off your nose to spite your face as the old saying goes.

As the fallout from the Eichel’s exit day comments continues, they were only enflamed by GM Kevyn Adams saying he only wants people that want to be here. Over the last several days, a number of hockey shows and insiders have unprovoked brought up that the Sabres would rather not trade him to the Rangers. If possible, they would rather prefer to send him out West.

Sabres would prefer not to trade Jack Eichel to the Rangers

TSN’s Frank Seravalli was on WGR550 in Buffalo and said, “I think the Minnesota Wild and New York Rangers are potential suitors for Eichel. I don’t understand why the Sabres would be willing to move Eichel to the Rangers. It’s probably not their first priority.”

Sportsnet’s Elliotte Friedman expanded on that point on WGR550. “I think the Sabres would rather trade Eichel to Mars than the Rangers,” he said. “You have to do what’s best for your team. At the end of the day, don’t you have to make the best trade? And if the Rangers give you the best deal isn’t it incumbent on your team to do it?”

The one thing not being argued anymore is IF the Sabres will trade Eichel. That seems like a foregone conclusion now. If the Sabres refuse to trade him to the Rangers to spite Eichel’s likely desire to go there it is understandable. However, should the Rangers offer be made public afterwards, and it turns out to be a better haul, Buffalo fans will revolt. 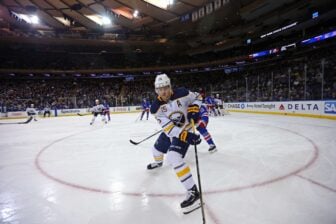 Rangers had a “reasonable offer” on the table last season

There are only a handful of teams that are known to be contenders for Jack Eichel at this point. They are the New York Rangers, Boston Bruins, and Los Angeles Kings. Of the three, the Blueshirts are the clear front-runners to land him in a trade. New York has the cap space, the assets, and most importantly the desire to make a trade for him.

Boston is unlikely to part with the prospects they need to in order to make a deal. They also have Taylor Hall in the fold now. The Kings, contrary to what some write, don’t have enough high end prospects to move the needle in Buffalo. Unless they include Quinton Byfield (which they won’t), there’s no deal there. Plus, I heard the Kings are not looking to add another $10 million player to the roster with Anze Kopitar already there.

Remember, Elliotte Friedman noted that the Rangers had a “reasonable offer” that obviously wasn’t good enough. That was probably a major factor in Dolan’s decisioning. Now those Jack Eichel talks are back with Friedman noting that the plan even before the change was to make another pitch. With Chris Drury at the helm, it sounds like it will be more aggressive.

“They were in on Eichel before this,” Friedman began. “It’s not like they were afraid to go after Eichel, they made the Sabres an offer on Eichel in the offseason. It’s one that at least made the Sabres think before deciding they weren’t ready to make the move yet. I don’t think Chris Drury will be any more or less inclined to make a move for Eichel as the organization is already prepared to do that.”

One player that will most certainly not be in any Eichel package is Alexis Lafrenière. Darren Dreger said as much on an appearance on WGR550 today. “A deal with the New York Rangers would have to include a top prospect and it’s not going to be Alexis Lafrenière.” he said. “I don’t think the Rangers are going to do that even if they have remote questions on Jack Eichel’s health.”