First and foremost, Jake Evans’ health is top of mind after the Montreal forward was carted off the ice via stretcher. Mark Scheifele in the aftermath of that hit was suspended for four games.

While the Winnipeg Jets look to even the best-of-seven series against the Montreal Canadiens, Scheifele faced the music today and spoke with the media about his hit. 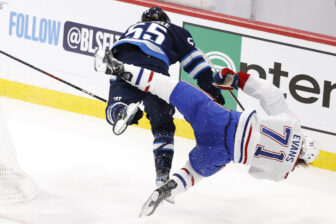 The NHL Department of Payer Safety came down hard on Winnipeg Jets forward Mark Scheifele for his charge on Jake Evans. Late in the third period, the Canadiens forward tucked home an empty net goal when Scheifele ran him over.

Evans was unconscious and needed to be stretchered away. As he was leaving the arena, he gave a thumbs up signaling he was ok.

According to the NHL DoPS video the hit is defined as charging. Scheifele argued that he maintained his speed to make a defensive play. However the league determined his intent was not to play the puck but to make a predatory hit on a prone opponent.

Mark Scheifele addresses suspension and attacks on his family

Mark Scheifele opened his press conference by wanting to address Jake Evans’ injury and praying for his health. “My intention was to negate a goal,” he said. “I don’t go in with the frame of mind of injuring a hockey player.”

Unfortunately in today’s day and age of social media, Mark’s family has been subject to harassment. This of course is a larger societal problem, but is completely uncalled for. When discussing that issue, Mark was visibly emotional.

“I thought the punishment was excessive – I wasn’t expecting that,” he began to comment on the length of the suspension. “I can accept the accountability, that’s what you sign up for. But the hate that my family has gotten, the bullying they’ve gotten, is completely unacceptable.”

Scheifele went on to explain that his family, including his parents whom he called “salt of the Earth” type people are getting harassed. “Online, phone calls – it’s pretty gross to see,” as he fought back tears. “For my parents to get hate like that, and my brother and sister it’s awful.”

Ultimately what Scheifele did was dangerous. It happened in the heat of a hockey game and he paid the price by getting suspended and possibly costing the Jets the series. These premeditated attacks on his family, who were not on the ice or instructing him to take a run at Evans are despicable. Sadly, most of those people, if not all will get away with it.