NHL Roster Freeze ends: What to expect from the Rangers; Eichel, Goodrow, and more

The NHL Roster Freeze ends today at 1PM ET. Now that the Seattle Kraken expansion has passed, all teams firmly know where they stand and what they can do next.

Chris Drury is no different and maybe one of the NHL’s biggest players starting as soon as 1:01 PM on the clock. Let’s dive in to what we can expect from the New York Rangers.

Rangers expected to announce the signing of Barclay Goodrow

Soon after the Rangers acquired Barclay Goodrow for a 7th round pick from the Lightning they began contract negotiations. It’s very possible they hammered out the majority of the deal prior to the NHL Roster Freeze kicking in. That’s also probably why they left him unprotected knowing he was unlikely to change his mind and sign with Seattle.

Today, the Rangers should announce they have come to terms with Barclay Goodrow on a deal worth $21.6 million. The contract is expected to be 6 years at $3.6 million AAV.

By signing the 28 year-old Goodrow the Rangers have strengthened their bottom six. The 6-2 forward skated in 55 games with Tampa Bay last season, picking up six goals and 20 points, along with a plus-16 rating and 52 penalty minutes. He also notched six points in 18 playoff games while helping the Lightning win the Stanley Cup for a second straight time.

Rangers on the verge of a trade for a center; likely Jack Eichel

Jack Eichel is expected to be traded before the NHL Draft tomorrow night. The Sabres made it clear that any trade for the 24 year-old would require a high first round pick.

The two frontrunners to land Eichel are the Rangers and Wild. If that first round pick is a key part of the deal the Rangers hold 15 and have the assets to move up. Meanwhile, the Wild are at 21. Just a note, the Coyotes who hold pick 11 have forfeited that for a Combine violation, allowing all teams to move up one spot.

Rangers have the ability to trade Ryan Strome and his $4.5 million AAV out. The Senators are interested in his services; so are the Sabres and Kraken at this time. Should Ottawa take Strome and pick 15 for their 10th, it improves the Rangers package. It’s unlikely the Wild could do something to move up that drastically.

Package wise, the Wild would have to basically gut their future in giving up Marco Rossi and Matt Boldy, two prospect centers. Then there’s the whole Eichel cap hit of $10 million for the next five seasons, and the Wild dead cap space starting next year of $12M, $14M, and $14M. Unless a third team gets involved, I just don’t see it.

The Rangers package is going to be steep, but they are overloaded with prospects on defense and wing that simply will not all be able to play here. If Strome is not moved out in another deal, he could be part of an Eichel trade. It’s also possible that Pavel Buchnevich could be moved due to his RFA status. Zac Jones is the most rumored defenseman to go in the deal, but it could also be Matthew Robertson.

Last note, if the Rangers miss out on Eichel I believe they will go after the one other rumored center left to be available, Evgeny Kuznetsov.

Forever Blueshirts has covered the Rangers interest in Jack Eichel dating back to February. Our information came from team sources, so it’s no surprise they are one of the final teams remaining.

Also Read:
New York Rangers will not overpay for Jack Eichel this summer

It turns out the rumor that there was a deal for Mark Giordano with the Kraken was not true, or at least never came to be. Elliotte Friedman already said that it’s unlikely after Giordano’s appearance at the draft he would be moved today. He also said the Rangers are still hunting for a veteran left defenseman.

Is it possible the Rangers will make a pitch for Ryan Sutter in free agency? Or could they work a trade with the Kraken who are overloaded on the blue-line for Carson Soucy? All possible options.

Finally, the Rangers are expected to buyout Tony DeAngelo as soon as today. 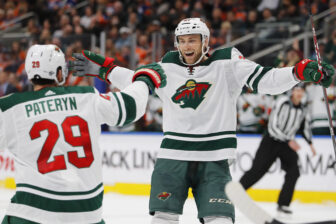 The Oilers have a deal in place for Zach Hyman and more.