The first round of the NHL Draft was largely overshadowed by a number of trades. Before the Sabres selected Owen Power No.1 overall, the New York Rangers made two cap saving moves. That was followed by the Sabres, Coyotes, and Blue Jackets all trading some big names.

The New York Rangers placed defenseman Tony DeAngelo on unconditional waivers Friday for the purpose of buying out his contract.

The St. Louis Blues acquired Pavel Buchnevich from the New York Rangers on Friday in exchange for fellow forward Sammy Blais and a second-round pick in the 2022 NHL Draft.

“There’s only so much cap space to go around,” GM Chris Drury said about the trade. “I feel pretty good with our depth at winger with some recent early draft picks we’ve had, with some veterans we’ve signed.” 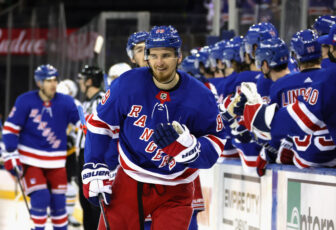 The Buffalo Sabres acquired a first-round pick in the 2021 NHL Draft (14th overall), a second-round pick in 2023 and defenseman Robert Hagg from the Philadelphia Flyers in exchange for defenseman Rasmus Ristolainen. No salary retained.

The Arizona Coyotes traded captain Oliver Ekman-Larsson and forward Conor Garland to the Vancouver Canucks on Friday in exchange for three players and the No. 9 overall pick in the 2021 NHL Draft, multiple media outlets reported.

Vancouver will send center Jay Beagle and wingers Loui Eriksson and Antoine Roussel as well as its first-round pick to Arizona, according to the reports. The Coyotes will also retain 12% of OEL’s cap hit.

The Chicago Blackhawks made a big move prior to the NHL Draft. They landed defenseman Seth Jones in a trade with the Columbus Blue Jackets, multiple reports said Friday.

Jones signed an eight-year extension with an average annual value of $9.5 million per year.

The package to Columbus includes Adam Boqvist, the 12th overall pick and a 2nd round pick in the 2021 Draft, plus a first in 2022.

Jones, who will turn 27 before the upcoming regular season, is the latest young talent to leave Columbus without interest in staying on a long-term deal, following former Blue Jackets Artemi Panarin and Sergei Bobrovsky two years ago. Reports indicated Jones did not want to sign a long-term deal with the Jackets. 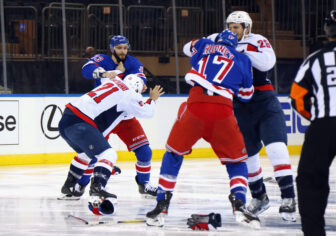 Taylor Hall played his cards right at the trade deadline. He used his no move clause to his advantage and landed on a team he wanted to be with. Now, he and the Boston Bruins have worked out a new deal.

Yesterday, the Bruins announced a 4 year contract for Hall with an AAV of $6 million.

“The Bruins are excited that Taylor wanted to remain a Boston Bruin and we are thrilled to have signed him to a multi-year contract,” GM Don Sweeney said in a statement. “He is an impact player that brings speed, scoring, skill and two-way commitment to our lineup. He fit seamlessly into our locker room and will be an integral part of our organization’s goal to compete for the Stanley Cup.”