NHL: Sabres make it clear to everyone, they are in “control of the process”

Sabres GM Kevyn Adams words today rang loud and to the point. When questioned on Jack Eichel, and primarily the fact he hasn’t been traded yet, a clear message was sent.

“There is no change on the medical side,” Adams began. “We are continuing to have conversations. What’s critically important to make sure is clear, is that we’re in control of this process. We have a player under contract. We don’t feel any pressure. If there is a deal that helps up we will do it. We don’t feel the need to do something to do something.”

In other words, a team will either pay the king’s ransom I ask for or you will just sit there and rot.

Sabres in no rush to make a deal

Throughout the Sabres press conference, Adams was candid and kept a smile on his face. If anyone thought he was bluffing about keeping Eichel heading into next season; they were wrong.

“We want players that want to be here,” Adams responded to a question if Eichel would be welcome to camp. The response seemed to walk back a comment over draft weekend where he mused that he’d be happy to have him back.

When he was pressed about the Eichel situation becoming a distraction, he doubled down on his previous statement.

“We’re not going to do something that doesn’t make sense for our franchise. If it’s the right time and the right deal we’ll do it. And I feel very strongly about that.”

During yesterday’s Free Agent Frenzy broadcast, TSN’s Bob McKenzie said, “The reality is things are dead quiet on the Jack Eichel front right now.” It didn’t help that teams were dropping like flies thanks to Buffalo’s high demands acting like a bug zapper.

“You can go up and down, and around the different teams that might have interest, but right now it’s on the back burner,” McKenzie continued. “The Sabres are saying that’s just the reality of the market right now and everybody’s going to sit tight. It’s not an ideal situation for the Sabres and Eichel, but as of right now it’s really soft, really quiet.”

I examined the situation of all the teams that were rumored interested and basically only the Rangers and Ducks have the cap space and assets to make this deal. And as of now, it doesn’t sound like a rebuilding Anaheim organization is in the mix.

Elliotte Friedman was on Buffalo WGR550 and basically reinforced what I wrote. “From what I heard, what Buffalo wanted and what the Rangers are willing to do wasn’t even close,” he said. “I think the Rangers are looking at it and asking ‘who are we really negotiating against?’ Does Buffalo have another outlet.”

Another top insider, Darren Dreger reported at the start of free agency that Jack Eichel and his camp’s “frustration levels” were on the rise. The teams lingering around are being classified as “tire kickers” at best.

As rumored teams spent their dollars yesterday it was like devastating blow after blow to Eichel’s hopes to being traded. The Wild who cleared cap space by buying out Zach Parise and Ryan Suter were always going to have a hard time to make this trade without some level of cap help, but they bowed out because of the ridiculously high trade demands.

It’s getting to the point where the Sabres are painting Eichel and his agent Peter Fish into a corner.

When will they come out and hold a press conference of their own? Time is running out on Eichel to have surgery and be ready for training camp. Something needs to happen.

As far as the Sabres are concern, they don’t mind sitting around and waiting.

–This article originally appeared at The Daily Goal Horn. 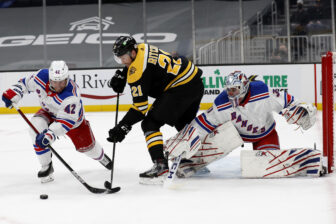 Also Read:
Rangers would do well to consider these options via trade or free agency