Former New York Rangers first round draft pick Nils Lundkvist is living up to his vast potential as a member of the Dallas Stars.

Lundkvist, 22, has 4 assists in 8 games this season after registering 4 points (1G-3A) in 25 contests while in New York last season.

“It was a very special situation this summer and I’m happy how everything ended,” Lundkvist said on Friday. “I’m happy for my time in New York too. I have so much respect for that organization. I’m happy they drafted me, believed in me, and let me play in the NHL. I learned a lot from last year, but now I’m very happy to be [in Dallas].”

When Nils Lundkvist asked the New York Rangers for a trade last January, both sides kept it quiet until agent Claude Lemieux pushed harder this summer for a deal.

The conditions per the New York Rangers press release are as follows:

Since the trade, Lundkvist has fit right in and impressed his new head coach Peter DeBoer.

“The kid’s been unflappable since we got him,” DeBoer said. “Offensively, you see the gifts but what I like is how he’s defended. He really hasn’t looked overwhelmed or outmuscled in hardly any situation all year. You forget he’s still a young defenseman.”

Lundkvist simply didn’t see a path forward in New York behind Adam Fox, Jacob Trouba, and suddenly Braden Schneider on the right side defense. That’s why he and his agent requested the trade.

The offensively talented Swede lost his spot to Schneider thanks to the rugged defender’s ability to play hard-nosed defense. It’s a knock that Lundkvist doesn’t feel is justified.

“You want to earn your playing time. I feel like I had a solid camp and they believe in me,” he said. “I feel like I’ve been more solid defensively. I also didn’t feel like that was a problem for me in New York. I had a big injury coming to camp the season before and this summer I had plenty of time to work on strength and conditioning. I feel like that’s been the difference.”

In the end, Lundkvist and his agent have spoken highly of the Rangers, but this is the opportunity he’s been looking for. When the Blueshirts come into Dallas today, he’ll have a chance to show them what he can do.

“It’ll be a special game,” Lundkvist admitted. “I know a lot of the organization. I haven’t played that many games there, but you get to know a bunch of the guys and the staff. It’s going to be a fun game.” 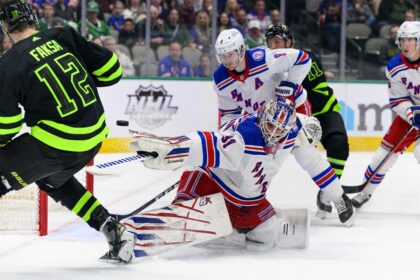