NY Rangers prospect Brennan Othmann is on a mission to dominate the OHL this season and is off to a tremendous start.

In just 5 games, the Blueshirts first round pick from 2021 has 11 points which is tied for third best in the league. He’s also tied for first in goals with 6 to date.

Last year, Othmann was an absolute force scoring 50 goals and 97 points for the Flint Firebirds in 66 contests.

Othmann, 19, is the captain of the Flint Firebirds, who are 3-2 on the season after a big 8-1 win over the Erie Otters.

On his first goal of the evening, Othmann makes a great steal and then proceeds to waltz in cool as a cucumber sliding it through the legs of Otters’ goalie Marshall Nicholls.

For his second goal, Othmann displayed his high hockeyIQ reading the play to get to open side of the net. He then showed his quick scoring hands taking a wide shot off the boards and slamming it home for an opposite post tally.

When the game was over, Othmann finished with 2 goals and an assist for first-star honors.

In other OHL prospect news, Bryce McConnell-Barker picked up 2 assists in an 3-2 OT loss for the Soo Greyhounds. The Rangers selected him in the third-round of the 2022 Draft. He has 5 points (1G-4A) in 7 games this season.

Will Cuylle gets one for Pack

Cuylle, 20, posted 43 goals and 80 points in 50 games for the OHL’s Windsor Spitfires last season. New York traded away Lias Andersson to the Los Angeles Kings in order to select the 6-3, 212 lbs forward in second round of the 2020 Draft.

Last night, beginning his first full season as a pro with the Hartford Wolf Pack in the AHL, he registered a goal.

The play was really made by captain Jonny Brodzinski, who dished it to Cuylle for an easy goal. It was still good to see the big forward follow the play and make no mistake for his first of the season.

Prospect defenseman Matthew Robertson registered two assists in the contest in the 4-3 OT loss to the Charlotte Checkers. 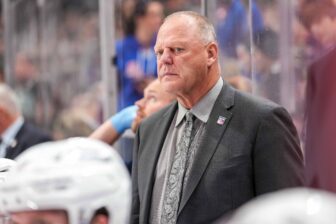 Also Read:
Gerard Gallant says Rangers ran out of gas, but not happy with defensive play