The NY Rangers lineup tonight may be a little different based on head coach Gerard Gallant’s pre-game presser.

“There might be [some changes],” he said. “We’re not 100% sure yet. We talked about players being banged up so we just want to make sure everyone is ready to go.”

Update: Both Ryan Lindgren and Barclay Goodrow did not skate in warmups. Justin Braun and Dryden Hunt will make their playoff debut.

Tonight at Madison Square Garden, his charges will look to even up their opening round playoff series against the Pittsburgh Penguins.

After an almost five hour excursion on Tuesday that saw the Penguins survive an injury to forward Rickard Rakell and goalie Casey DeSmith, Evgeni Malkin ended it in triple OT. It was the 151st shot of a game that also featured 76 hits and 52 blocked shots.

Game details can be found here, including TV, Streaming, and Listening Info.

Defenseman Ryan Lindgren left the Game 1 with a lower-body at the start of the third period, but eventually came back before a more permanent exit after the second overtime.

He could’ve been already banged up. In the team’s final game of the season, a 3-2 win over the Washington Capitals, Lindgren got tangled up with a Caps player and visibly limped off the ice.

“He’s banged up a little bit but he’ll be there tomorrow,” Gallant said on Wednesday. “Maintenance and get ready for playoff games. That’s the way it’s going to be for a lot of players.” 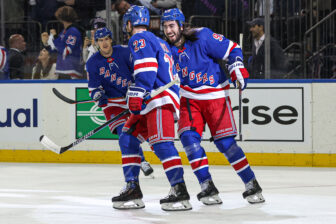 Also Read:
New York Rangers challenge in Game 2 will be getting on the power play against Penguins

Gary Bettman weighs in on all the talk about expanding the Playoffs. Read more.