The NY Rangers lineup versus the Detroit Red Wings will officially see center Filip Chytil make his return to the lineup after a long absence. Goaltender Jaroslav Halak will be today’s starting goalie per Gerard Gallant.

Libor Hajek will also play today in place of defenseman Ryan Lindgren, who is listed as day-to-day with an upper-body injury. Hajek, 24, has no points in 3 games.

Ryan Lindgren, 24, has 2 assists in 12 games this season. He was hurt in the Rangers last game against the Bruins when David Pastrnak caught him illegally when he wasn’t looking. Pastrnak received an interference call.

The Blueshirts will try and get veteran netminder Jaroslav Halak back on track looking for his first win of the season.

With Filip Chytil’s return to action after going down against the Columbus Blue Jackets two weeks ago, he will return to center the third line. Jimmy Vesey will play the left flank while Barclay Goodrow slides to the right.

Ryan Reaves will likely be a healthy scratch for the second time this season. 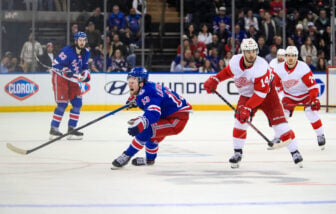