They enter this week with a record of 6-4-3 and will play 4 games starting with a close to their four-game home stand against the New York Islanders on Tuesday. The Blueshirts currently sit in third place of the Metro Division standings with 15 points. They’re just a point up on the Philadelphia Flyers (2 games in hand) and Islanders (1 game in hand).

This past week saw the Rangers once again have trouble getting pucks by the opposition goalies as they scored just 5 goals in their three games. Unfortunately, in their quest for offense, they continuously abandon their sound defensive game leading to glorious scoring chances against. They allowed 8 goals in the last two games of the week.

“The old problems of giving up the odd man rush bit us again tonight,” Gerard Gallant said on Sunday. “We made some good plays in the o-zone but we just seem to gamble too much. Turning pucks overs and not enough people coming back giving up odd man rushes.”

Chris Kreider missed a breakaway chance earlier in the game but buried the crucial one with 52.8 seconds left in overtime to get Igor Shesterkin his first shutout of the season.

Mika Zibanejad found a loose puck in d-zone and quickly got it to Kreider, who was streaking down the middle of the ice. Kreider then slipped a backhander past goalie Carter Hart for his fourth goal of the season.

“A little panic set in when I saw Mika just give it to me,” Kreider said. “I tried to shoot low blocker earlier in the game so I figured I fake it and do Mika’s backhand move. It was an exciting ending.”

Trent Frederic broke the 2-2 tie with 6:04 left in the third period as the visiting Bruins then poured it on a struggling Rangers defense. The loss of Ryan Lindgren just 10 minutes into the game compounded ever present issues in their defensive play this season en route to a 5-2 blowout,

The Rangers got goals from Jimmy Vesey and Adam Fox. Igor Shesterkin took the loss even though he made 32 saves.

“I thought we swung momentum back in the second,” captain Jacob Trouba said. “They just kind of got back on top of us in the third and that was it.”

Dominik Kubalik scored a power-play goal with 2:17 remaining in overtime off a questionable holding the stick call against K’Andre Miller to give visiting Detroit a 3-2 come from behind win.

The Rangers blew a 2-0 lead by giving up two goals off of bad defensive reads in the second period. Kaapo Kakko and Mika Zibanejad scored the Blueshirts goals in the first period.

Jaroslav Halak played his best game of the season stopping 33 of 36 and was the reason New York even picked up a point.

“I think the way we played in the first period, we have our recipe on how we want to play,” Zibanejad said afterwards. “Sometimes we make it too hard on ourselves. We know what we have to do, we just have to do it more often.” 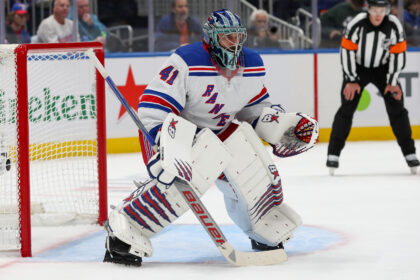 The New York Rangers will play four games this week including two on the road in Detroit and Nashville.

On Tuesday, the team will open against their most bitter rivals in an early must-win game. The Blueshirts and Isles only play three times and this will be the second meeting between the two on the year. The Isles won the first match 3-0 and if the Rangers want to distance themselves in the Metro, they’ll need to win these divisional games.

This rest of the week is not going to be easy and the Rangers can’t look ahead to Sunday’s home tilt against the Coyotes. Not after Detroit just beat them and the Nashville Predators continue to play good defense. Plus, the Yotes are still playing for pride despite not having a very good lineup.

Vitali Kravtsov was back at practice this weekend and could possibly return at some point in the near future.