“I think Igor’s been outstanding,” Gerard Gallant said. “I’m happy with Igor from Day One. We know what we have back there.”

The Blueshirts enter this week with a record of 9-6-4 and will play play at total of three times. They’ll wrap up their four-game western road trip with a back-to-back set against the Los Angeles Kings and Anaheim Ducks this Tuesday and Wednesday. After Thanksgiving, they’ll return to Madison Square Garden to face the Edmonton Oilers in a Saturday matinee.

Gallant’s squad currently sits tied for third place in the Metro Division standings with 22 points. The New York Islanders hold the tiebreaker due to their 11 wins. At the top of the division are the New Jersey Devils with 30 points (1 game in hand) and in second are the Carolina Hurricanes with 23 (1 game in hand).

“Plenty of times last year our goalie stole games for us,” Gerard Gallant said after beating the Coyotes Sunday. “He didn’t need to steal this tonight but he kept it scoreless until we got going in the second half.”

The Rangers jumped for joy when Vincent Trocheck found a loose puck with just 1:54 left in the game to tie it and force overtime.

They had survived a miserable second period being outshot by a 16-5 margin thanks to Igor Shesterkin’s brilliance in net not allowing one to get by him. However, the team would only get the single point as the Seattle Kraken persisted on the attack and eventually saw Justin Schultz knock one in off the glove of the Blueshirts’ goalie.

“First period was great, second period was awful, and the third period was pretty even,” Gerard Gallant said via the team’s YouTube channel. “There was some good stuff, but there was some bad stuff in the second period that we got away from what we did in the first period. [Shesterkin] kept us in the game and we found a way to get a point but it’s not good enough. We’re better than that.”

Trocheck also made a key play on the team’s first goal by kicking a puck over to Chris Kreider, who found Mika Zibanejad cross crease for a power play tally in the first period.

Adam Fox, coming off NHL Third Star of the Week honors notched an assist on the game-tying goal to extend his point streak to 7 games.

The Rangers held on for dear life after thinking they had downed the San Jose Sharks once Fox scored an empty-net goal with 67 seconds remaining.

Instead, the Sharks swam harder and cut the deficit in half when Logan Couture slammed one home at 19:43 of the third. Then Igor Shesterkin, who finished with 22 saves in the contest, made an incredible stop off a deflection with 4 seconds left to preserve the 2-1 victory for the Blueshirts.

Prior to that, it was a scoreless game heading into the third period.

The Rangers finally broke through late in the third after relentless work. With 6:03 remaining, Ryan Carpenter won a draw clean back to Jacob Trouba. The Rangers defenseman ripped a shot that Julien Gauthier managed to get a stick on to change the trajectory to beat Reimer.

“It was a nice little reward at the end. We had a good game my linemates and myself putting a lot of pucks on net,” Gauthier admitted. “That win felt good for our group. We stuck with it and got two points.” 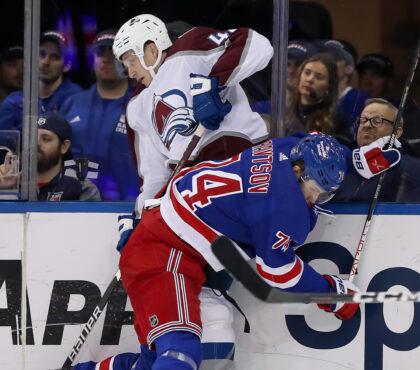 The New York Rangers will play three games this week including a back-to-back set on this long western trip.

On Tuesday, the team will a tough Los Angeles Kings team that comes into play with a record of 11-8-2 good for second in the Pacific Division.

The Rangers then head to Anaheim on Wednesday and face old friends Ryan Strome and Frank Vatrano in the most winnable game of the week. The Ducks are 5-12-1 and deal last in the Pacific Division.

New York closes the week against another Pacific Division foe, but this time at home when they take on Connor McDavid and the Edmonton Oilers, who sport a 10-8-0 record. They’re in fourth place.

Here’s how they’ve fared so far:

Expect Jaroslav Halak to get the call against the Anaheim Ducks. Vitali Kravtsov should also get back into the lineup in one of these games.