Vitali Kravtsov has been unable to get back into the New York Rangers lineup, a team that’s looking for secondary scoring. That’s one of the main reasons Gerard Gallant opted to reunite the Kids Line, thus removing Alexis Lafreniere and Kaapo Kakko out of the top six.

Bad luck injuries and a tooth infection aside, Kravtsov is a talented forward that was selected ninth overall back in 2018, but can’t seem to gain any traction with the Blueshirts.

“Every time he gets on the ice he gets hurt,” Gerard Gallant said after Kravtsov was hurt in Dallas on October 29. “It’s a shame.”

He returned to the lineup for two games against the Islanders and Red Wings, where he earned his only point (an assist) in a 8-2 blowout of Detroit. He then fell ill again with a tooth infection and has missed the last four straight.

Kravtsov, 22, was cleared to travel for this four-game road trip making him a healthy scratch for the last two contests.

This has truly been a rough season for Kravtsov, who desperately wants to show the Rangers and the NHL what he can do.

“I feel great,” Kravtsov said prior to facing the Isles on 11/8. “I’m going to build the confidence. Play well, help the team, help myself. Play hard and fast. I’m feeling much better right now than a week or a month ago.”

Sadly, that good feeling lasted just two games before a tooth infection sidelined him once again.

The biggest issue for Kravtsov being unable to crack the lineup has been the play of two other right wings in Julien Gauthier and Jimmy Vesey.

Gauthier, 25, has 3 goals and 4 points in his 11 games since being called up from the Hartford Wolf Pack. Another former first-round pick, the big and fast winger is making the utmost out of this opportunity. His latest goal was a huge one tallied last night in a scoreless game against the San Jose Sharks.

“It was a nice little reward,” Gauthier said after the 2-1 win. “We had a good game my line-mates and myself putting a lot of pucks on net. That win felt good for our group. We stuck with it and got two points.”

Currently, the Quebec native is playing on the fourth line and thriving. His physical and speedy style allows him to be very effective in Gallant’s forechecking system. Just ask Ryan Reaves how good Gauthier’s been.

Jimmy Vesey is also occupying a spot in the lineup on the first line because of his ability to play a gritty and puck retrieving style.

The 29 year-old came to camp on a PTO playing for his hockey life. Thanks to his hard-work and ability to kill penalties, Vesey earned a one-year deal. This season, he has two goals (one shorthanded) and 6 points in 18 games.

Both Vesey and Gauthier play a north-south style that fits the Rangers needs on their respective lines. Kravtsov is a skilled winger that plays more of an east-west game that the team has more than enough of in the lineup.

Eventually Kravtsov will get back in there and will need to show he can play a little more diverse game. That doesn’t mean he should abandon the style that got him here, but if he wants to grab a foothold in the lineup, he’ll need to play grittier.

He’ll also need to start scoring too. That will really keep him in there.

Kravtsov signed a one-year, one-way deal this summer and will be an RFA in July. He remains a likely trade candidate for a trade deadline rental. 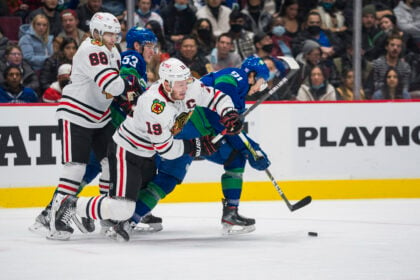