The New York Rangers are coming off a character win against the Arizona Coyotes on Sunday night. After returning from Nashville at 3 AM that morning, they were absolutely lifeless to start the contest being outshot 17-4 in the first period. Igor Shesterkin stopped every puck allowing time for his team to find their skating legs en route to a 4-1 win.

Now the squad is heading on their first western trip of the season with four games spaced out over seven days. It all begins Thursday night in Seattle where they’ll take on the Kraken.

“I would sooner go on a four-game road trip than one game here and back,” Gallant admitted via the team’s YouTube channel. “It’s a long trip out there today– five or six hours. The good thing is we have a practicer there tomorrow after a good practice today. If we can maintain the way we’ve played we’ll win more than we’ll lose.”

The Rangers are 8-6-3 on the season with a 4-3-0 record on the road. They’ve won three out of their last four away from Madison Square Garden and outscored their opponents by an 18-9 margin.

Vitali Kravtsov ready to return, but will he play?

The Rangers held a spirited practice today and injured winger Vitali Kravtsov was back on the ice rotating in with Barclay Goodrow on the second line.

Kravtsov, 22, has missed the team’s last two games due to the flu and an infected tooth. He has 1 assist in six games this season, which came in the team’s 8-2 blowout over the Detroit Red Wings last week.

“I’ll know more this afternoon but he looked great out there today,” Gallant said. “We haven’t made a decision (if Kravtsov will play). We just played a really strong game but he looked really good and I can’t see them telling me he’s not ready.”

Another player that was rotating in is Ryan Reaves. He took turns on the fourth line with Julien Gauthier. The 35 year-old has been used sparingly of late as he’s dressed in just one of the Rangers last five matches.

“I want Reavo to be a good player every night and be a big part of our group,” Gallant explained. “Right now, we’ve added more speed to our group and when he doesn’t play that’s probably the reason.”

Here’s a look at today’s practice lines as per USA Today’s Vince Mercogliano:

The defensive pairs from the last game will likely remain the same and Igor Shesterkin should get the start.

Jacob Trouba, who is dealing with several nagging injuries was given a maintenance day. 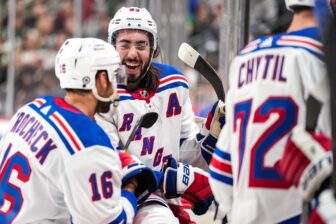 Skinner, 21, had no points in five games with the Wolf Pack this season. Last season, he registered 13 points in 49 AHL games.

The New York Rangers selected Skinner in the fourth-round of the 2019 NHL Draft. He signed his entry-level contract with the team on March 29, 2019.

Check out our interview with Hunter Skinner from June 1, 2020 here.