The NHL Trade Deadline is not until March 3, 2023 but it’s never to early to check out the potential market for the New York Rangers.

There are several players that are almost assuredly going to be available. Some others may or may not be based on where their current teams are in the playoff hunt. At the moment, the Rangers don’t have any cap space to make a deadline move. However, that doesn’t mean salary won’t be heading back the other way for a deal to work.

Let’s take a look at possible candidates and determine which players would make the most sense for the Blueshirts.

Below are seven players that may be available but and a fit for the Blueshirts and a potentially long playoff run.

The Rangers are currently rolling out Jimmy Vesey on the first line. If that doesn’t scream the need for a top flight right wing, then I don’t know what does. Here’s two options.

Patrick Kane: With one year left on a deal that hits the cap at $10.5 million and a full no-move clause, it’s really up to him where he will go. Kane has 13 points in 16 games for a Hawks team that’s clearly rebuilding. We know he can put up points when playing with talented players as Kane registered 92 points in 76 games last season. Gerard Gallant would immediately put him on a line with his old friend Artemi Panarin. One thing to make clear is that the cost to acquire him will be high with a boatload of picks, prospects and a key young forward going back the other way. Of course, if the Blueshirts really believe they’re one player away from winning the Stanley Cup, then this is the guy you take the risk with.

Vladimir Tarasenko: Another good buddy of Panarin’s is this fellow Russian. Latest reports indicate that Tarasenko has not rescinded his trade request from last season and is open to a move. He’s coming off a great season where he recorded 34 goals and 82 points in 75 games. The scoring forward has 13 points in 16 games for the Blues this year. If St. Louis is teetering for a wild card spot, he could very well be a much cheaper alternative on the wing than Kane.

If the Rangers can’t land a bonafide top right wing for their top six, then a trade for a center for a deep playoff run makes sense.

Barclay Goodrow has already shown he can move to the wing and if Filip Chytil is not traded in any of these deals, he could also adjust to playing on the right flank.

Jonathan Toews: One center everyone believes will be available is the captain of the Blackhawks, He is no fan of the rebuild Chicago is undertaking and will likely be looking to waive his no-move clause come the next trade deadline. The Hawks will have to eat half of his $10.5M contract in order to entice a team to take the pending UFA. After struggling last season, Toews has 10 points in 16 games and looking more like his old self.

Bo Horvat: If the Rangers can’t land Patrick Kane, then this is the next top player I have on my list for the trade deadline. The Canucks are struggling and may very well be looking to do more than just fire another head coach. With Horvat likely to become a UFA in July and tearing it up with 14 goals, and 20 points in 17 games, he’d make a great addition. Everyone just needs to understand that he’ll cost more than a player like Toews. The Canucks were interested in Chytil last season.

Dylan Larkin, Ryan O’Reilly, and Sean Monahan: Of these three, Monahan is the only one I believe 100% will be traded at the deadline. He’s a solid two-way center and would help the bottom six for a cheap price (maybe a draft pick). As for Larkin and O’Reilly, they could be there come March but signs are pointing to extensions. If not, then they are both worth exploring. 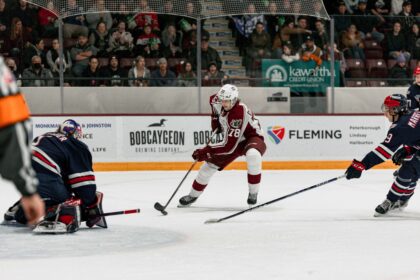 — Some information in this article appears on The Daily Goal Horn