Poll: New York Rangers fans speak out on who they want as their next captain

Today, players all across the NHL will be taking their physicals in preparation for the beginning of on-ice testing and workouts. Training camps are open and the New York Rangers have 60 players on their roster for the start of it.

The Blueshirts have a new head coach in Gerard Gallant. While the team has a few fresh faces like Barclay Goodrow and Ryan Reaves, most are new to the man nicknamed, Turk.

His responsibility will be to select the best players for a 23 man roster, but he is also going to weigh in on who the next Rangers captain will be.

Fans vote on next Rangers captain

“We can keep moving this thing forward, a big piece of that for me would be getting a captain. For me it’s a priority,” Chris Drury said back in June. “At the end of the day, it has to be the right person. I’m not interested in giving it to someone to just say we have a captain. I think we have a lot of leaders in our room and leaders that have taken big steps, including the second half of last season.”

Before Development Camp opened up, Drury was asked if it was still a priority. He affirmed that it is, but wants to give his new bench boss time to get to know the players before a final decision is made.

So who do the loyal Rangers fans think should be captain? In their eyes it seems pretty clear.

I posted a non-scientific poll on Twitter with four names. Here’s how almost 3000 fans voted:

The longest tenured member of the Rangers, Chris Kreider received 1054 votes. Oddly, it was not Mika Zibanejad who came in second, but Adam Fox. With 769 votes, the Norris Trophy winner is viewed as captain material by the fans.

So why Kreider? One fan explained that he’s already taken on that leadership role and knows how to handle the media. Others mentioned his tenure, while the naysayers called him too inconsistent. One fan even joked, just so he could be traded like the last two captains.

For me, Kreider has always made a lot of sense. Not because of his tenure but because he makes himself accessible to the younger players. Many of the Rangers prospects have gone on record that Kreider has skated with them and mentored them.

Also, at 30 years of age, he is the best segue into the next Rangers captain. That could be either Adam Fox or Alexis Lafrenière. Both are too young to take on the responsibility now.

Will Kreider become the next captain? I doubt Gallant will take too much stock into this poll, but it will be interesting to see where the organization lands. 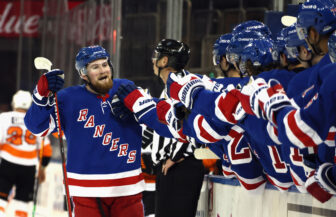 The Wild signed RFA Kirill Kaprizov to a monster deal worth $9M per season. That and more at The Daily Goal Horn.