Reports are breaking that the New York Rangers have made public the hiring of Mike Kelly and also added Gord Murphy to the staff. Larry Brooks of the NY Post is also noting that a third assistant will be added.

We noted yesterday that Gerard Gallant in a recent interview on The Power Play with Steve Kouleas and Marty Biron, was looking to get his assistants in place this week. “I will get my coaching staff in place in the next week or so,” Gallant revealed on Friday. “[We] want to get down to work, and get ready for the season.”

It should come as no surprise that Mike Kelly is one of the assistant coaches. Matter of fact, it was likely all but agreed to when Gallant was hired. The two have worked closely together in all three NHL cities that Gallant has coached and most recently won Gold in Latvia at the World Championships.

Gord Murphy who was hired by Chris Drury to help Kris Knoblauch in Hartford gets promoted. He also has experience with Gallant in Columbus. However, and most importantly, he was on the bench during the Rangers hot stretch when David Quinn and the staff were out on COVID protocol.

Murphy will provide intimate details as to what went right or wrong last year.

Dan Girardi unlikely to be the third assistant

While it is still possible that Girardi could join the staff, I wouldn’t bet on it. Don Granato made it crystal clear he wants Girardi right back at his side in Buffalo. The third assistant is usually parked in the press box and not on the ice, so that would be a demotion for Girardi. 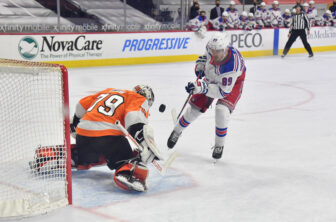 We have a trade! The long rumored deal is done and Duncan Keith is an Oiler. Read more.